Bahamas Petroleum announces update ahead of exploration drilling in 2020

Bahamas Petroleum Company, the oil and gas exploration company with significant prospective resources in licences in The Commonwealth of The Bahamas, has provided details of several important in-country developments, as the Company continues its coordinated work effort toward drilling of an exploration well in The Bahamas in 2020. 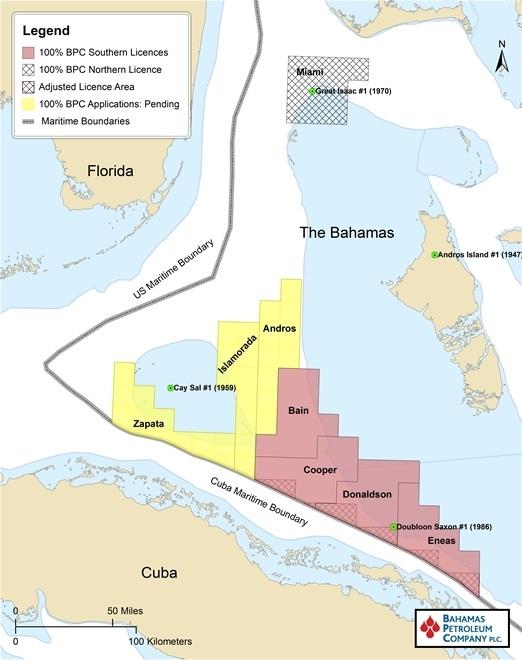 With BPC's sole focus being to explore for, and thereafter commercialise, Bahamian hydrocarbon resources, it has long been the Company's stated objective to ensure, if possible, that the people of the Bahamas have an equal opportunity to participate in the ownership of the project, through the ability to invest in the Company.

Following implementation by the Government of The Bahamas of updated operations, safety and environmental laws and regulations (in 2016) specific to the offshore industry, their clarification of the Company's licence term (in February 2019) and the consequent progress being made by the Company towards commencing exploration drilling in late Q1 2020, the Company considers that it is now an opportune time to revisit the matter of providing local Bahamian investors with a means to invest in the Company.

In conjunction with its advisors, the Company will be seeking to develop and implement a Bahamas-domiciled mutual fund investment vehicle with the sole mandate of owning BPC shares. Thus it is intended that through this mutual fund, Bahamians will be able to invest in the Company and thus in the exploration and potential development of hydrocarbon resources in The Bahamas. To this end the Company has engaged Leno Corporate Services Limited ("Leno"), a Bahamian investment services and fund management firm, to act as its adviser for this purpose.

The Company expects that, following a further process of consultation with Leno and various administrators in The Bahamas, details of the proposed mutual fund, including the terms, how investors' interests in BPC would be reflected, eligibility for, anticipated timeframe and manner of subscription, will be confirmed in the coming weeks.

In 2012, in accordance with the requirements under then prevailing laws in The Bahamas, BPC completed an Environmental Impact Assessment ("EIA"), which was reviewed and accepted on behalf of the Government of The Bahamas ("Government") by the Bahamas Environment, Science and Technology ("BEST") Commission. Since then, the EIA document has been a public domain document open to public scrutiny and comment (via both the BEST and BPC websites). The Company has also undertaken extensive community consultation and made numerous public presentations to communities, stakeholders and public bodies throughout The Bahamas (New Providence and the Family Islands).

In 2016, new laws and regulations pertaining solely to the petroleum industry and more specifically to offshore exploration and production were adopted in The Bahamas, with the effect of modernising and strengthening legislative oversight in areas of safety and environmental compliance. These new laws and regulations introduced for the first time in The Bahamas an entirely new concept of Environmental Authorisation ("EA"), as a required mandatory step before commencement of drilling activities. In April 2018, BPC submitted an EA application in compliance with this new regulatory requirement. BPC's EA application included, inter alia, an updated EIA (to that already accepted in 2012) and an Environmental Management Plan ("EMP").

BPC's EA application, including the updated EIA and EMP, was reviewed by energy consultants Black & Veatch ("B&V") as external consultant advisers to BEST Commission. B&V's methodology and mode of analysis consisted primarily of a "gap analysis", in which B&V sought to identify any gaps in the EA documentation provided by BPC against any applicable laws, regulations and applied international standards.

Subsequently, the Company appointed Acorn International ("Acorn"), a leading international environmental adviser, to work with the Company and liaise with B&V / BEST Commission in finalising the relevant EA documentation so as to address any gaps as identified by B&V.

A major part of the work being undertaken by Acorn pertains to incorporating into the EA documentation detailed data unique and specific to the actual rig, that will undertake the planned drilling activity. Substantial elements of the document submitted in April 2018 contained, of necessity, only generalised data of a 'hypothetical rig' that could be utilised to carry out the drilling operations. However, now that BPC is working with Seadrill, specific data from the rig that will be mobilised to the field is available and can be included as part of the application update. This data includes, in particular, technical details, equipment lists, standard operating procedures, and response plans specific to that rig.

All parties are working collaboratively on the task of concluding all work necessary for the finalisation of the EA in early Q1 2020, so as to meet a timeline developed in conjunction with BEST and Government directive, and consistent with drilling activities scheduled to commence as planned in late Q1 2020.

A substantive piece of work to be undertaken as part of the EA process is an Environmental Baseline Survey ("EBS"). This survey will determine the environmental baseline conditions (biological, chemical, physical) at the proposed drilling location by providing detailed measures of the currently prevailing environmental conditions, and against which any potential effects of future operations can be detected and measured. This includes collection of samples (at a range of water depths and distances from the proposed drill site) to characterise macroinfauna, document physicochemical conditions and characterise the water column. A photographic survey will be used to further characterise the seafloor substrates and associated biological communities as well as identifying any potential archaeological artefacts. This is over and above the work previously completed (and included in the 2018 EA application) that described the surface and shallow subsurface conditions of BPC's Southern Licence areas using detailed 3-D exploration seismic interpretation, multibeam bathymetry, and hull-mounted sub-bottom profiler.

In conjunction with a marine environmental consulting firm, CSA Ocean Sciences ("CSA"), a Terms of Reference for this work was developed, and submitted to BEST. Following a detailed review and consultation with their appointed external consultants, the Terms of Reference were approved by BEST, and two specific permits issued:

In the coming weeks CSA will now proceed to deploy the necessary vessel to site to commence the physical work of sample collection, and thereafter proceed to the detailed biological, chemical and physical analysis of samples collected, as required and agreed with the Government.

A significant component of the EMP is having a proactive and effective response plan to any potential incidents. Responding quickly and efficiently requires knowledge of where to respond to and which habitats to prioritise. To this end, since 2012, BPC has created and maintained environmental sensitivity maps of coastal area habitats, fauna and flora and sensitive receptors to allow the Company, any stakeholders or any Government agencies to have a better understanding and appreciation of coastal life and usage, thereby helping direct an effective response (if required).

A key piece of additional knowledge required for finalising BPC's response plan is predicted fate and behaviour of particles or matter in the sea depending on prevailing currents, tides, water depth, surface conditions and weather data. Such predictions are derived based on advanced simulation models using many years of historic data. BPC completed such a simulation as part of its EIA in 2012, but, as agreed with Government, is seeking to supplement this previous study now with new and repeated studies.

To this end, BPC has engaged leading industry consultant RPS ASA Group to undertake this study, making use of RPS' proprietary state-of-the-art three-dimensional modelling tools. Completion of this work is expected in early Q1 2020, when the outputs of this study will be incorporated into the EMP as appropriate.

'As we continue to move toward drilling of an initial exploration well in The Bahamas in 2020, I am pleased to advise of two important in-country developments.

First, BPC is seeking to assess the petroleum resources of The Bahamas, which in the event of a successful exploration campaign and thereafter development, could be transformational to the economy of The Bahamas, by adding significantly to the nation's revenue base over and above that from more traditional sources. In 2016, the then Government established a framework in law for the establishment of a Sovereign Wealth Fund, for the purpose of harnessing such revenues. Beyond this, however, we at BPC have long believed that Bahamians should be able to invest in the Company, and, in this way, have a 'direct ownership' interest in their own national resource. We have therefore initiated a process seeking to create a Bahamas-domiciled mutual fund, which, in the event of its establishment, would provide a vehicle whereby individual Bahamians will have that opportunity to invest in BPC's project of potentially national significance. We expect to be able to provide full details of this initiative in the coming weeks.

Second, the timely receipt of requisite approvals from the Government means we have been able to commence a critical piece of preparatory work ahead of drilling activities: the collection of a comprehensive range of samples necessary to demonstrate the current ambient conditions at the proposed drill site. This will allow a direct assessment of any potential impact from our planned activities, noting that those activities by their very nature will be for a short, temporary duration, close to the international maritime border with Cuba, in a location which is an active marine thoroughfare serving both the existing petroleum facilities in The Bahamas as well as the entire region. We remain on track to see drilling commence on schedule.'