The flow test results to date suggest reservoir damage and mud filtrate build up around the well bore given that the IMIC-1 well encountered good reservoir porosity (20% within the net pay gas zone) and gas saturations in the Pa IV sandstone reservoir based on electric wireline logs and gas shows (gas inflow to the drilling mud) while drilling late last year. In addition, well test results from the nearby historic well drilled in the mid 80’s flowed at up to 1 MMSCFPD and subsequent cuttings from IMIC-1 drilling analysis together with modern petrophysical analysis from the well logs indicated good Pa IV gas reservoir permeability.

The workover rig used to run the well production equipment prior to testing is being de mobilised as it is no longer required for ongoing flow assessment work. Further down hole pressure measurement and sampling of reservoir fluids work will be undertaken utilising low-cost wire line equipment following rig demobilisation.

The potential reservoir damage and mud filtrate damage build up around the well bore, may have resulted in the blocking of reservoir fluids due to mud ingress into the reservoir and the build-up of nonpermeable filtrate from drilling mud. This damage can be overcome with acidisation, which is a routine practice within these reservoirs in the Pannonian basin where carbonate cement within the reservoir matrix containing movable hydrocarbons is common. Modern rock typing work has indeed established the presence of carbonate cement (Siderite) within the Pa IV reservoir. A nearby oil well (2.5 km to the north) also required acidization prior to initial commercial flow.

ADX will assess the potential for stimulation and clean up using acidisation to initiate commercial well flows following the ongoing down hole pressure and sampling work mentioned above. ADX believes the equipment required to acidise and flow test the well will be readily available.

Further flow testing results will be provided to shareholders over the coming weeks including the analysis of down hole pressure measurement and fluid sampling as well as the results of any future clean up stimulation or testing programs.

The IMIC -1 well encountered gas across three zones with a combined total arithmetic sum for the three zones of 20 BCF 2C contingentresources estimated (refer to table below). The well was suspended for future completion as a producer following testing. Testing has been deferred until down hole well production equipment was manufactured and then further delayed due to borderclosures caused by the Covid-19 pandemic which have prevented testing operations until now.

Testing will concentrate on the PA IV sand (Pliocene age) which is a proven reservoir and has the greatest upside reserves potential of the 3 hydrocarbon bearing reservoir intervals intersected in the IMIC-1 well (refer to table below). This reservoir unit has a large stratigraphic upside potential which will be further quantified in the near future with the planned high resolution 2D seismic program scheduled for the third quarter of 2020.

The expectation based on mudlog data and nearby analogues is that a dry gas will be produced which will require minimal processing prior to market delivery.

Following the completion of the production testing program the well will be shut in awaiting commercial production at a future time.

The resource potential of the three gas reservoirs intersected at IMIC -1 will be further assessed utilising high resolution 2D seismic that will be acquired across IMIC-1 and potential IMIC-2 accumulations. The appraisal seismic is expected to better define the extent of gas zones where ADX has interpreted substantial stratigraphic resource upside (refer to ASX announcement on 9 September 2019). The appraisal seismic will be acquired in conjunction with the planned 3D seismic program during the 3rd quarter of 2020 in close proximity to the IMIC -1 and the IMIC-2 wells. 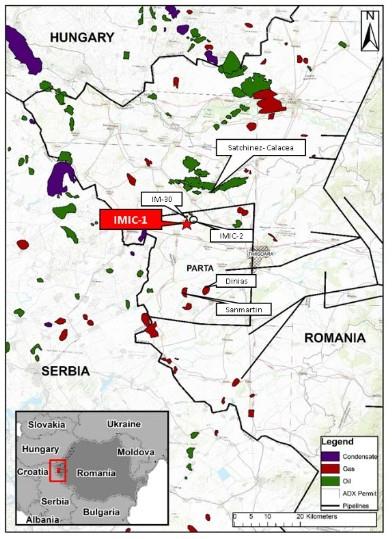