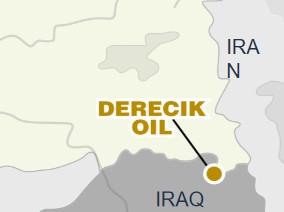 Trillion Energy reports that the evaluation of the Zagros Basin Derecik Exploration Licenses in the Hakkari area of Turkey is complete and yielded promising results.

Trillion has 100% interest of 42,833 hectares of the Derecik Licenses which covers the extension of the oil rich Iraq Zagros Basin into Turkey – proximate to several world class oil fields located in Northern Iraq. Trillion’s Derecik Exploration Licenses oil fields are located in proximity to the following proven oil fields:

The nearest well on the Turkey side of the border for the Zagros Basin is 85 kms away from the Derecik Licenses and never reached the target reservoir, leaving the region significantly unexplored.

Oil seeps and bitumen found on the Derecik Licenses have been analyzed and indicate that there is a petroleum system in the Derecik region which bears resemblances to the oil field found in Northern Iraq.

The result of the photo-geological study, geochemical analysis of the oil seeps and bituminous samples, offset well information in Iraq and seismic data shot and interpretation within the Derecik Licenses has identified 7 leads, with 2 of those 7 leads drill ready. All leads area result of Cretaceous and Miocene compression which is the dominant play in Northern Iraq.

The two drill ready structures are:

The two locations are expected to contain analogous reservoirs as found in the Shaikan Field located 90 km south of the locations. Shaikan produced average 32,883 bopd in 2019 and have 2p of 578 million bbls oil.

In Turkey the fiscal terms are far superior to what is found in Iraq. In Turkey has a 12.5% royalty and a 20% corporate tax whereas in Northern Iraq it is substantially more expensive and has greater security and other risks.

The Company estimates that drilling a well on the Derecik license will cost about $10 million while an equivalent well in Northern Iraq would cost about $60 million.

Trillion is evaluating the next steps to capture the value of this highly prospective license, which it expects will involve drilling one of the two prospects, at dates to be determined.

'Successful exploration efforts on the Derecik play have the potential to yield a significant conventional oil discovery accessible for low production costs, competitive in today’s oil environment. We are excited about our evaluation of the property’s drilling prospects, given its proximity to super major fields and our data analysis conducted to date.'