Echo Energy, the Latin American-focused upstream oil and gas company, has announced that the Campo La Mata Exploration well ('CLMx-1') in the Tapi Aike licence has been drilled to a total measured depth of 2,513 metres in the Palermo Aike Formation and that wireline logging has now been completed.

On the basis of the encouraging initial data from drilling and logging operations described below, a positive decision has now been made with the Operator, Compani´a General de Combustibles ('CGC'), to move to the next stage of operations to complete and test the well. 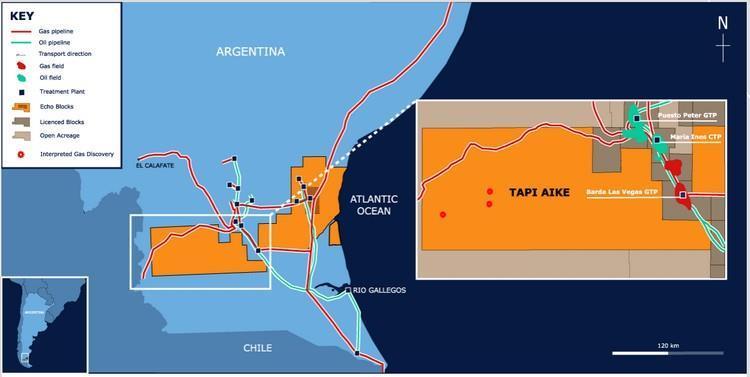 The upper secondary target ('Mag 60' or 'Lobe G') was encountered at 1,977 metres. Within this package two fine-grained sandstones have been identified that coincide with elevated gas shows of 109,900 parts per million ('ppm') and 149,500 ppm against a background of 16,500 ppm.

The primary target ('Mag 20' or 'Lobe C') was encountered at 2,181 metres and coincided with elevated gas shows of 72,900 ppm and 80,300 ppm in the uppermost 15 metres within a fine-grained sandstone. Two cores, of 19 metres each, were taken over the primary target between 2,185 metres and 2,223 metres with 100 per cent recovery. Further analyses will be undertaken on the cores, but the lower of the cores showed a well-developed fine-grained sand in the bottom 10 metres.

The lower secondary target ('D3' or 'Anita') was penetrated at a measured depth of 2,265 metres. Within this target, a 20 metre section of several fine-grained calcareous sandstones has been identified between 2,391 and 2,411 metres. This unit also demonstrated elevated gas shows whilst drilling with an increase of up to 1,000,000 ppm in the mud log. This reading indicates that the measurement system had become saturated as a result of the inflow of gas.

The initial analyses of the wireline log data have been completed, indicating six zones of potential interest. In the Mag 60 these intervals are at 2,006 to 2,009 metres, 2,077 to 2,082 metres and 2,106 to 2,108 metres. In Mag 20, the primary target, zones of interest are 2,183 to 2,211 metres and 2,214 to 2,225 metres. In the lower secondary target, Anita, the interval of interest is at 2,395 to 2,403 metres. These intervals have been identified from the wireline logs (spontaneous potential, photoelectric factor, resistivity, density and neutron) together with mud log information. The Anita sandstones were found to be over pressured by approx. 30%.

While the presence of gas shows in the target sections, combined with the data retrieved during logging, have resulted in the Company and Operator taking the decision to move to completion and testing, gas shows can be a result of various processes.  The Company cautions that completion of the well test and the analysis of the test results will be needed to conclusively establish the presence of producible gas.

The well will be completed by the Petreven H-205 rig with a 5 ½ inch casing. Perforation and initial inflow testing will then be undertaken by the Quintana-1 rig, which is expected to mobilise to location shortly. Rigless hydraulic stimulation will also be conducted on the well after the inflow tests have been completed and further announcements will be made, as appropriate, in due course.

The Petreven H-205 rig will now mobilise to the Company's Campo Limite well in the Palermo Aike concession of the Santa Cruz Sur asset. This well remains on course to spud before the end of December