AIM-listed President Energy, the energy company with a diverse portfolio of production and exploration assets focused primarily in South America, has provided an update on its drilling programme in Rio Negro Province, Argentina.

President has announced that it has the drilling rig under contract with Quintana Well Pro for its new wells to be drilled in Rio Negro province. Well site preparations have commenced and the Company expects to commence drilling on schedule by the end of March 2021.

Planning has evolved since the 'H1 2021 Drilling Update' made on 20 January 2021. All of the wells are of the slim hole type and located near existing facilities so that they can be placed on production with no material delay or cost.

The first well to be drilled will be LB-1002 in the Las Bases field as previously announced. It is a gas well targeting the Centenario formation with a target depth of 1,300 metres, time to drill is estimated at 10 days and a projected cost of US$1.4 million. As indicated in the previous announcement, President projects 40,000 m3/d (1.4 MMsft/d or circa 230 boepd) initial production. The original projected depth of the well has been extended to take in further deeper potential pay zones in the formation shown in the seismic data. Extensive logs will be taken to improve understanding of the formation and its produceability.

The second and third gas wells will now be at the Estancia Vieja field. These are twins of old wells that have suffered casing collapses, but prior to which showed proven gas production. The wells EV-1001 twinning the old well EV x-1 (which produced in December until the collapse) and EV-1002 twinning the old well EV-4 have each a target depth of 1850 metres, an estimated drilling time of 12 days and a cost of US$1.6 million. The Company projects initial production from each of these wells at 60,000 m3/d (2.1 MMsft/d or circa 350 boepd).

As so far President has produced from only one well in the Centenario formation namely the old but newly perforated well LBx1, the interposing of the Estancia Vieja wells should allow consideration of the logs and initial production testing of LB-1002 with a view to determining the nature of follow-on wells at Las Bases. It is expected that the above three firm wells will be completed and in production during May. The timing of any follow-on wells at Las Bases will be provided once these wells, as per the above, have been determined.

In parallel to the above work, again as previously announced, in the next few days the new well LB-1001, drilled and completed in Q4 2020, will be subject to a workover to perforate and produce from the original main target interval in that well, being the Intra- Loma Mantosa formation. It is anticipated that initial production from that interval of some 26 metres total net thickness will be 80,000 m3/d (2.8 MMsft/d or 470 boepd). This interval should provide longer life and less water production than the lower much thinner section which had very good initial production but is currently being produced with a high percentage of water.

As anticipated, spot gas prices in Argentina, even still in the summer months, have shown increases with a level of US$2.5 per MMBtu currently and rising. President now projects spot gas prices possibly reaching US$3.5 per MMBtu in the five winter months commencing in May. 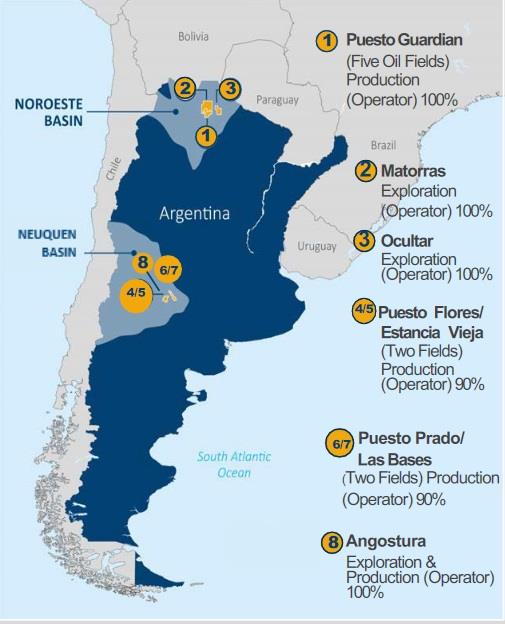 'President continues on its stated work trajectory with a prudent level of optimism supported by robust pricing for our gas offerings.

'The mission is to make our average production more robust, increase our well stock to greater insulate us against the inevitable well down times, benefit from economies of scale using our own pipeline infrastructure and get these gas wells drilled on budget and in time for the more favourable winter price environment.'