Australia’s top two electricity generation sources, coal and natural gas, have both seen demand in the country peak, a Rystad Energy analysis shows. The combined power production from coal and gas will be overtaken by electricity generated by solar photovoltaic (PV) and onshore wind farms from 2026.

In fact, installed power generation capacity from solar and wind top that of coal and gas already from 2023, but transmission limitations will prevent some of the electricity produced from these clean energy sources from reaching urban centers and cities.

Coal has been the king of fuels in Australia’s power generation history, but its share in the domestic generation mix has declined steadily from 83% in the year 2000. This year alone Rystad Energy expects Australia’s coal-to-power generation to decline 2.6% from 2019 to 145.67 terawatt-hours (TWh). The slide is likely to dip below 100 TWh already after 2024 and will continue in the years thereafter.

Gas-fired power generation, on the other hand, has kept rising in the past decade to a peak of 55.33 TWh in 2017, and was little changed at 54.36 TWh last year. Rystad Energy expects these levels will soon be a thing of the past, however, as we forecast gas-fired power generation to fall to 45.64 TWh in 2020 and to continue dropping every year until the end date of the analysis in 2040.

Australia’s overall power generation is forecast to slip to 263.88 TWh in 2020 from 265.23 TWh in 2019 as a result of lower electricity consumption during the Covid-19-related lockdowns. From 2021 onwards we expect an uninterrupted annual rise in Australia’s electricity generation all the way to 2040. 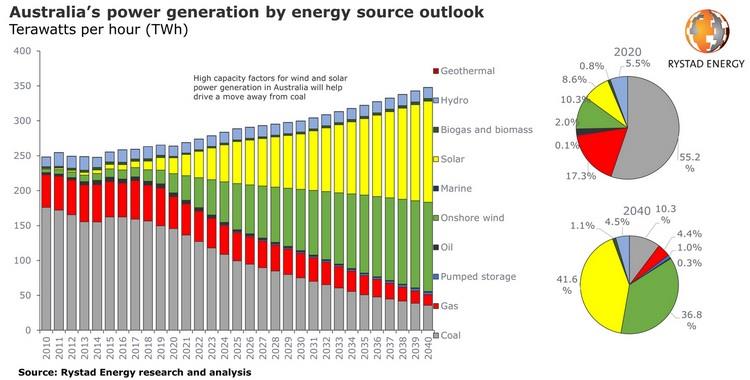 Solar and onshore wind-power generation is forecast to see a spectacular growth in Australia in the next years as roughly 200 gigawatts (GW) of PV, wind and storage projects are lined up to replace decommissioned coal-fired plants.

Although solar power will account for only 22.81 TWh and onshore wind for 27.24 TWh in 2020, Rystad Energy expects their combined power generation to grow by between 10 and 15 TWh annually through 2026, when their cumulative electricity output is set to reach just above 134 TWh – slightly more than the combined coal and gas-fired power generation.

Rystad Energy’s estimates predict a great future for renewable power in Australia, but they also reveal an obstacle that makes a full adaptation of clean electricity difficult. Australia will have sufficient installed solar and wind capacity to exceed coal and gas in power generation already from 2023, but transmission limitations will delay the milestone by at least three years.

“The challenge will be to successfully shift from a centralized grid to one that is inverter/weather-based. Also, the lack of new transmission capacity is likely to be an obstacle. Most areas rich in solar and wind resources in Australia are located inland and far away from urban centers and cities. Currently, the transmission system is fixed from coal generators to the cities and is weak to areas inland,“ says Rystad Energy’s senior analyst David Dixon.

Furthermore, the variability of solar and wind will have to be complemented with energy storage to provide some stability to the grid. Several projects to achieve this are in the pipeline.

Rystad Energy expects the most mature form of energy storage, namely pumped storage, to increase from 1.4 GW in 2020 to 10 GW in 2040. Pumped storage will cover the long duration dips in wind and solar, while short-duration shifts will be covered by lithium-ion batteries.

On the transmission front, Australia has vowed to improve transmission infrastructure, with A$5.1 billion of capex committed for transmission-related projects towards 2025, 88% of which are in New South Wales. A number of transmission projects are currently going through the Regulatory Investment Test for Transmission (RIT-T), or have passed it successfully. Many of these projects are scheduled for completion by 2025.

The impact on Australian’s coal and gas industry

Although the fall in coal-for-power consumption is substantial in a local context, the impact of future reduced domestic demand on Australia’s coal industry will be a lot less as the main market for Australian coal is overseas. Australia’s total black coal production (metallurgical and thermal) was 462 million tonnes last year, of which approximately 400 million tonnes were exported.

Coal for use in domestic Australian power stations normally has significantly lower energy content than the standard export coal specification of 5,500 to 6,000 kcal/kg. This means that many mines supplying local power stations will have limited ability to sell that coal in the export market, even if there is transport infrastructure in place to move the coal to port terminals.

The expected decline in gas-fired power generation means the future for domestic gas consumption is not very bright either. Gas-for-power demand has already peaked at 15 billion cubic meters (Bcm) in 2017 and will see a steady stepwise decrease to 6 Bcm in 2040.

Contrary to coal, however, Australia may take advantage of international gas demand growth to absorb some of the gas that is no longer needed in the domestic market by increasing its LNG exports to achieve a higher utilization rate at these facilities. While also have the fuel as a plan B for security of supply for electricity from a lower-emitting energy source when the renewables-dominated power mix falls short.