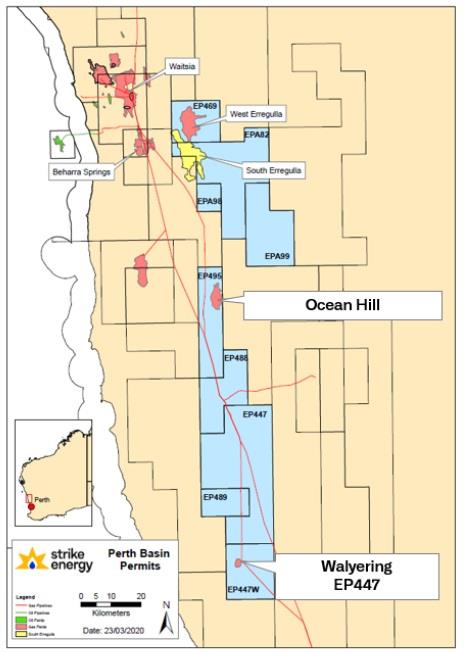 Strike Energy has executed the definitive documentation reflective of the agreed terms announced on 20th July 2020 for the farm-out of a 45% non-operated interest in EP447 to Talon Petroleum in exchange for a $6 million carry.

Talon has paid a $1 million transaction bond, which is to be applied towards Talon’s free carry obligations.

The transaction remains subject to ministerial approval, following which Strike and Talon will be taken to have formed an unincorporated Joint Venture in EP447 (Walyering). The JV will then proceed to appraise and, if warranted, develop the Walyering wet-gas discovery.

Strike has completed the well design and identification of a proposed well location in preparation for the upcoming appraisal drilling in CY21.

Strike has commenced discussions with nearby industrial gas and energy users for the potential consumption of the gas and condensate streams should the Walyering appraisal well prove successful. Due to the ‘sweet’ nature of the hydrocarbon stream and low inert / CO2 content expected (evidenced via the Walyering-1 production analysis), Strike is confident that Walyering can be brought onstream quickly without the establishment of major processing infrastructure.

Walyering is an excellent test-case for the geotechnical work Strike has carried out across the Jurassic Wet Gas Play in the Cattamarra sequence. Should the appraisal drilling prove up a commercial development, then Strike expects this will be a catalyst for a material uplift in valuation of its net 1, 353 km² acreage position across the play. On success, Strike will look to accelerate Ocean Hill 3D seismic which represents a significant structure that continues this play trend.

'Strike is pleased to close this transaction and welcomes Talon as its joint venture partner at Walyering. This transaction will support the acceleration of appraisal drilling at Walyering which,if successful, could be a fast to market additional source of production from Strike’s substantial acreage position in the Perth Basin.'

The Walyering conventional gas discovery was made in the Cattamarra Coal Measures (at an approximate depth of 3,400m SS), a play that has been proven to support commercial production from the gas projects at Gin-Gin and Red Gully.

The permit covers 1,110 km2 and was acquired in 2018. Since acquisition Strike has carried out over 90km2 of 3D seismic at Walyering in late 2019 which has markedly improved Strike’s confidence in both Walyering and the broader Jurassic wet gas play. The high-resolution data indicates the presence of a wet-gas accumulation up-dip of the Walyering-4 well location.

Walyering is strategically advantaged with its location being situated between WA’s two major gas transmission lines, and with the gas that flowed from Walyering-1 measuring only 1% CO2 and flowing at 13.5mmscf/d. Furthermore, major industrial gas users are located in the immediate area with established uses for both the gas and condensate streams at their operations. This all translates into a potentially low cost and fast paced development without the need for significant processing or transport infrastructure.