Red Emperor Resources has announced that a binding Letter of Intent ('LOI') has been entered into with Pilot Energy and Key Petroleum in order to secure an option to acquire a 70% operated interest in the offshore Perth Basin exploration permit, WA-481-P.

Pursuant to the terms of the LOI, Red Emperor has agreed to fund the completion of an existing committed work programme comprising geological and geophysical studies required to be undertaken within the final year of the current permit term, up to a capped amount of A$150,000. Contemporaneous with such work programme being completed, the existing JV partners, Pilot Energy - 60% interest and Key Petroleum - 40% interest, in conjunction with Red Emperor, will formally apply to the National Offshore Petroleum Titles Administrator (NOPTA) for a renewal of the permit, which currently expires on 19 February 2020.

On completion of the work programme, currently being managed and administered by Key Petroleum, and a favourable renewal decision from NOPTA, Red Emperor will have the exclusive option to acquire a 70% interest in, and the right to operate (subject to any requisite regulatory approval(s)), WA-481-P, in return for paying the JV partners collectively A$500,000. Red Emperor has until 15 business days after NOPTA's approval of the permit renewal application to exercise such option. A renewal decision is currently expected to be received in Q1 2020.

The interest to be acquired in the permit will remain subject to a 10% Net Profits Interest in favour of a former project operator, Murphy Australia WA-481-P Oil Pty Ltd, to be paid from future hydrocarbon production from any developed discoveries made on the permit. 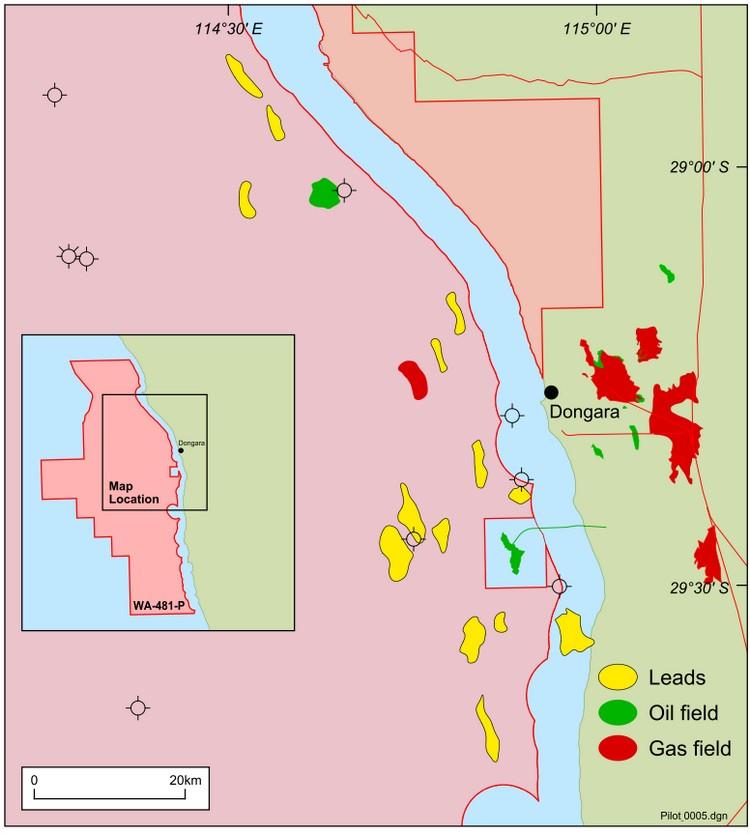 'We are pleased to announce the securing of this option over a very large exploration area in the Perth Basin, Western Australia, which reflects the culmination of a significant amount of work by the Board and its consultants. We believe the WA-481-P block is predominantly oil prone, relatively shallow, and represents the western side of a large structural trend that onshore has seen recent, material discoveries. The Company is well funded to take a position in this play whilst continuing to identify and evaluate additional projects that can potentially provide relatively near term, high impact drilling opportunities.'

Permit WA-481-P is situated immediately adjacent to the western side of licences that host the 18 million barrels ('MMBbl') Cliff Head Oil Field and Xanadu oil discovery. The permit currently covers approx. 17,457 sq km and a renewal application will be made for an extension of the exploration period of up to a further 5 years. This will entail relinquishment of 50% of the outboard part of the permit area which is considered by Red Emperor to be non-prospective. The firm work commitment for the first three years of the renewal period is expected to be based on a two-phase seismic commitment. The JV members would, however, have the right to accelerate such activity, subject to the requisite permitting and financing.

Historic exploration activity has focussed on either multi-fault affected closures on the crest of the Beagle Ridge or steeply tilted fault blocks that have been shown to preserve limited or no valid closure over time. This being due to the various phases of structuring that have affected the Perth Basin.

Accordingly, in the offshore area there have so far been five modest sized discoveries, mainly oil, with Cliff Head the only commercial development. There are two gas discoveries on the permit area, at Frankland, and far to the north, Perseverance that has clear evidence of a paleo oil column. In essence, it too was an oil field before late generated gas displaced the oil from the closure.

Although there are numerous leads and prospects mapped in the block, Red Emperor's focus will be on the potentially large closures that are mapped along the western, downthrown side of the Beagle Ridge, abutting the regional scale, N-S Geraldton Fault system. These completely undrilled structures are directly analogous in form to the trapping mechanisms of the onshore Waitsia Gas Field but with Permian reservoir targets buried to generally less than 2,500m. The relatively shallow depths should help to preserve reservoir quality.

For comparative purposes, the currently best-defined structure, the Doran Prospect that is located immediately adjacent to the west of the Cliff Head Oil Field may have a closure extending over 35km². Cliff Head, that has reserves of 18 MMbbls covers less than 6km².

The prospective trend appears to continue for some 150 km along a N-S strike and will require further geophysical effort, likely including 3D seismic, in order for drillable prospects to be matured.