Senex Energy has announced that the Gemba gas field in the Cooper Basin is on production following successful tie-in to the Santos-operated gas gathering network. 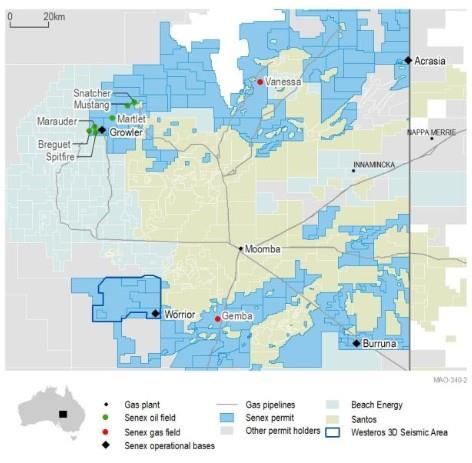 The Gemba field (PEL 516: Senex 100% and operator) is located on the south-west margin of the Allunga Trough, about 5km from existing infrastructure and 37 km south-west of the Moomba processing facility. The field was discovered in late 2018 with subsequent testing supporting ultimate gas recovery estimates of ~15 petajoules,subject to successful field development (refer ASX announcement of 29 August 2019).

Following successful tie-in to the Santos-operatedgathering network, the SACB JV is now processing raw gas from the Gemba field under a gas processing agreement.Gemba 1 is currently producing raw gas at ~4 mmscf/day on a constrained basis.

Sales gas is being sold to the Pelican Point Power Station in South Australia under a fixed price gas sales agreement in line with current market prices. Associated liquids, including ethane, LPG and condensate, are being sold to the SACB JV as part of the gas processing agreement.

Gemba is expected to contribute additional production of around 0.1 mmboe in FY20.