Strike Energy has provided an update on the appraisal drilling operations at Walyering-5 (W5) in the Perth Basin on behalf of the EP447 JV.

Strike drilled the intermediate hole section of W5 down to 2,380m MD (measured depth) and has run and cemented 9-5/8” casing in place. Strike has then pressure tested the casing and is preparing to run in hole with an 8-1/2” drilling assembly.

Strike will drill the production hole section in 8-1/2” hole down to a depth of 3,274m MD and expects to encounter the primary and secondary objectives in the A Sand and B Sand of the Cattamarra Coal Measures at prognosed depths of 3,073m and 3,195m MD respectively. On success Strike will conduct an evaluation program before casing and securing the well for future testing operations.

The Walyering-5 well will be drilled down to a depth of ~3,200m MD and is designed to test the updip potential of the Walyering wet-gas discovery, and on success recommence the development of the field, which stalled under previous ownership.

The Walyering conventional gas discovery was made in the Jurassic Cattamarra Coal Measures (at a depth of 3,165m subsea), via the Walyering-1 well which flowed at 13.5mmscf/d and measured only 1% CO2 from the A-Sand. EP447 which includes Walyering, covers 1,110 km2 and was acquired in December 2018. Since acquisition Strike has carried out 90km2 of 3D seismic in late 2019 over the historical Walyering wells which has markedly improved Strike’s confidence in the interpretations of wet-gas accumulations at Walyering and within the broader region.

The Walyering wet-gas field is strategically located being situated between WA’s two major gas transmission lines, linking the field with WA’s industrial gas markets. The Walyering-5 well is located at: Latitude: 30° 43′ 48.30”, Longitude 115° 28′ 43.61” Strike Energy is operator and the holder of a 55% joint venture interest in EP447, and Talon Energy a holder of the other 45% joint venture interest. 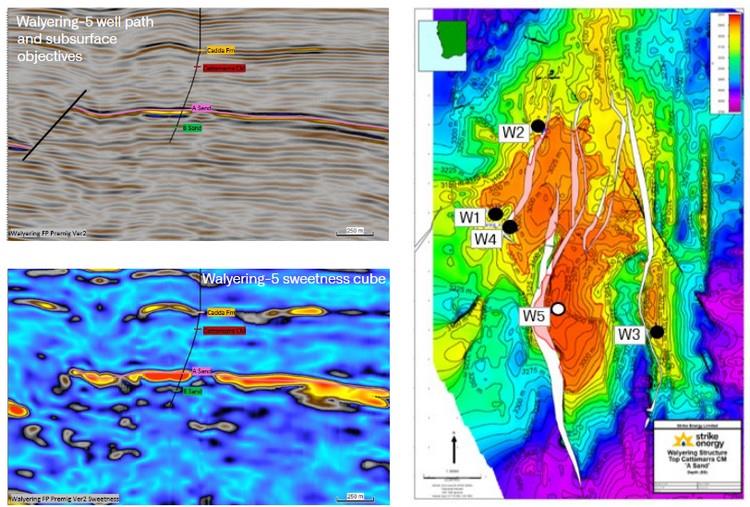