Vintage Energy has announced the results of the independent certification of contingent resources for the Odin Field in the Cooper Basin.

'The material booking of contingent resources for the Odin gas field, an increase of almost 190% on the pre-drill prospective resources, is an outstanding result. The Odin and Vali gas fields combined constitute a sizeable and potentially scaleable Cooper Basin gas province that we believe will supply significant quantities of gas to the east coast of Australia for at least the next twenty years.

The impact of the increased scale of the Odin Field is a material change to Vintage, its shareholders, and Joint Venture partners. The surging demand for gas on Australia’s eastern seaboard is reflected in higher pricing on the spot market, with increased demand for gas globally reflected in rising LNG pricing.

We were confident that Odin would over deliver once extensive gas shows through a number of target zones were observed, but to have this confirmed and independently certified by ERCE is a massive boost for all concerned. We have also recently sent updated information from the recent Vali-2 and Vali-3 drilling campaign to ERCE to update their review of reserves for the Vali Field. As well as all this, we are well advanced with our discussions with third parties regarding pre-sales of Vali Field gas and pipeline infrastructure finance.

I believe that the oil and gas sector has been heavily discounted for some time now. As the world transitions toward carbon neutrality, natural gas has an important role to play in reducing emissions through delivering cleaner energy to homes and businesses. To this end we are excited and ready to play our part in this transition in the years to come.'

The Odin-1 exploration well was drilled with the Schlumberger SLR184 rig and reached total depth at 3,140 metres on 26 May 2021. Extensive gas shows were encountered in sandstones through the primary target Toolachee and Patchawarra formations, as well as a basal sand in the Epsilon Formation. These shows were confirmed as gas pay via the wireline evaluation program, with gas samples successfully recovered from the Toolachee and Epsilon formations.

The well was subsequently cased as a gas discovery for flow testing and future production, with first production likely to be targeted from the Toolachee Formation, which, due to better reservoir quality, is expected to only require perforation in order to produce. The flow on effect of this is a deferral of capital expenditure that would have been incurred had the Patchawarra Formation initially been fracture stimulated for flow testing and production. Ultimately the well design will encompass flow from both the Toolachee and Patchawarra formations. The presence of gas in the Toolachee, Epsilon and Patchawarra formations, along with success in the Vali Field, clearly indicate that hydrocarbon bearing zones are still discoverable in areas in the Cooper Basin that have previously been lightly worked over by other companies. This is a demonstration of the ongoing technical success that the Vintage team is having in terms of mapping, identifying, and drilling successful gas wells. 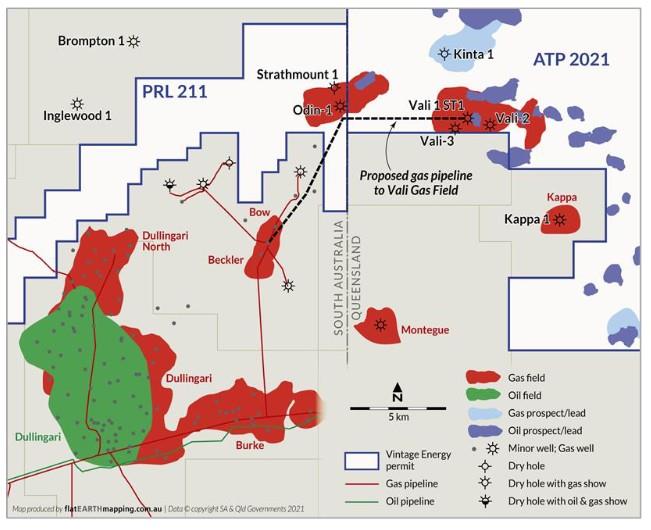 ERC Equipoise ('ERCE') independently certified 36.4 billion cubic feet (“Bcf”) of gross 2C Contingent Resources in the Toolachee, Epsilon, Patchawarra and Tirrawarra formations of the Odin gas field located in both PRL 211 and ATP 2021 on the southern flank of the Nappamerri Trough in the Cooper Basin. While all these formations contributed to the certified gas volumes, the majority of the resource is based in the Toolachee and Patchawarra Formations.

The Contingent Resources are sub-classified under the Project Maturity Sub-Class as described in the SPE Petroleum Resources Management System 2018 as 'Development Unclarified' by ERCE and Vintage. The key contingencies are a final investment decision on development, committing to a Gas Sales Agreement and any other necessary commercial arrangements, plus obtaining the usual regulatory approvals for production.