Brazil awards all four blocks in 5th pre-salt licensing round

Brazil's 5th Production Sharing Round, held September 28 by ANP, had all its four blocks acquired: Saturno, Tita, Pau-Brasil and Sudoeste de Tartaruga Verde. The Round raised R$ 6,82 billion in signing bonuses and R$ 1 billion in planned investments on the exploration phase. The goodwill of the profit oil offered was 170,58%.

'It was the first production sharing round with more than one block on offer to have 100% of the areas acquired', said ANP’s director general, Décio Oddone. 'With today's goodwill, which averaged 170%, our expectation of raising royalties and taxes over the 35 years of the contracts rose from R$ 180 billion to R$ 240 billion. But the most important thing is to look at the total of the production sharing rounds since last year. The results of the 2nd to 5th rounds, considering the oil at $70 a barrel, will generate R$ 1.2 trillion in revenue for the Federal Government, states and municipalities, or about R$ 40 billion per year'.

In the bids under the production-sharing regime, the winning companies are those who offer the Brazilian State, from a minimum percentage set in the tender protocol, the largest portion of oil and natural gas produced (i.e., the largest portion of profit oil). The signing bonuses, also defined in the tender protocol, are fixed.

According to the law in force, Petrobras has the right of first refusal to act as the operator in blocks of the pre-salt and those considered strategic. The company opted to be the operator, with a 30% share, in the area of Sudoeste de Tartaruga Verde.

See below the results of the round: 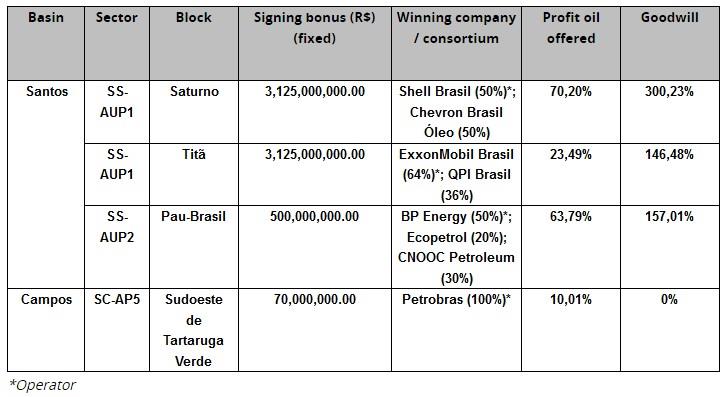 The 5th Production Sharing Round continues the multiannual calendar of rounds, instituted by the National Energy Policy Council (CNPE), which provides auctions until 2021. Since 2017, six auctions have been held. In addition, the Open Acreage of areas started this year. It consists of the continuous offer of fields and blocks returned (or in the process of being returned) to ANP, and exploration blocks offered in previous rounds but not acquired. 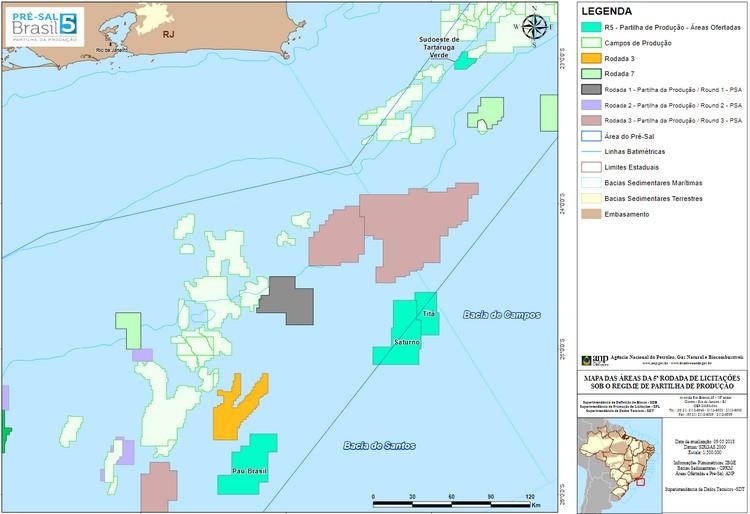