Arrow Exploration has announced the results of the Rio Cravo Sur-1 ('RCS-1') well testing on the Tapir Block in the Llanos Basin of Colombia.

The RCS-1 well was spud on May 23, 2022.  RCS-1 targeted a three-way fault bounded structure with multiple high-quality reservoir objectives on the Tapir Block in the Llanos Basin of Colombia. The well was drilled to a total measured depth of 8,656 feet (8,105 feet true vertical depth) and encountered six hydrocarbon bearing intervals totaling 55 net feet of oil pay.

Specific production test rates for the isolated new zones (shallowest to deepest) include:

Test results are not necessarily indicative of long-term performance or ultimate recovery.

After the C7B test performance, the decision was made to put the C7B on production.  Arrow decided not to test the up-hole C7 zones, and the Gacheta C, as they had been proven to be oil bearing in RCE-2.  The test of the Gacheta B zone was cut short due to formation water production. 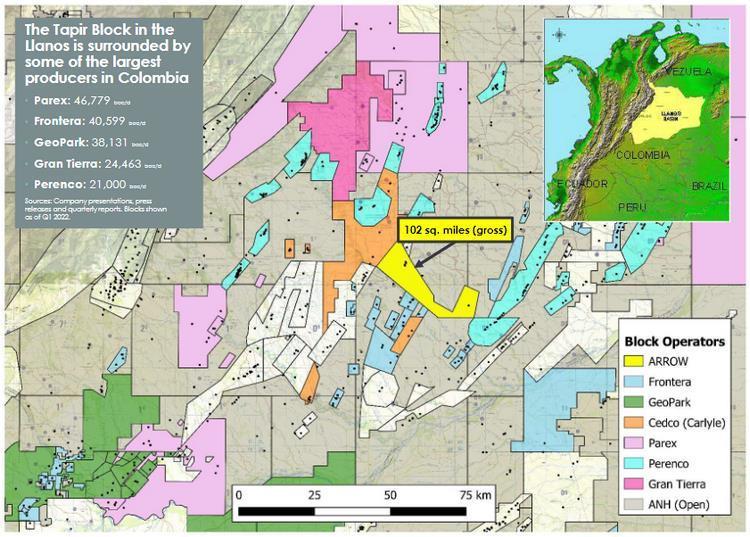 The Rio Cravo Sur-1 ('RCS-1') is located in the Tapir Block in the Llanos Basin of Colombia (Source: Arrow Exploration)

'We’re encouraged by the material results of RCS-1, the third well on the Tapir block. RCS-1 identified new zones for further exploitation with flowing results returning better than expected.'

'We’re currently completing the C7B zone, targeting to be on stream this week. This increases Arrow’s production and reserves. The Company intends to bring RCS-1 on slowly and increase production to best manage the oil reservoir.'

'Arrow’s current production is providing positive cashflow for the Company during a high commodity price environment.  Continued strong production rates from existing tied-in wells combined with the encouraging results from new drills in Colombia  support the Company’s objective of achieving a production rate of 3,000 boe/d within 18 months of its AIM listing (completed in October 2021).  This is an exciting time for Arrow, and we look forward to providing further updates on our progress.'

The RCS-1 well costs came in under budget.