United Oil & Gas has announced an update on the drilling of the ASD-2 development well in the Abu Sennan licence, onshore Egypt. United holds a 22% working interest in the licence, which is operated by Kuwait Energy Egypt.

The ASD-2 development well, which was drilled to test the north-western culmination of the commercial discovery in the ASD field last year, safely reached total depth  of 3,631 metres. The well has now been logged and is interpreted to have encountered at least 25.5 metres of net oil pay across the Abu Roash and Bahariya reservoirs. An estimated 20 metres of net pay was encountered in the Abu Roash-E reservoir, significantly above pre-drill expectations. The well will be tested and completed in the coming days and brought immediately onstream through the existing ASD facilities, adding additional production and revenue for United. United will provide a further update to the market once the well has been brought onstream and flow-rates have been established.

Next well in the Egypt Drilling Programme

ASD-2 is the first well in the 2022 Abu Sennan drilling campaign. After completion of ASD-2, the ECDC-6 rig will be released and the campaign will continue with the Sino Tharwa-1 rig. Technical work to finalise the drilling locations at the Al Jahraa and ASH fields is ongoing, and as a result, the ASV-1X exploration well has now been brought forward in the drilling programme as  the next well to be drilled. United estimate that the ASV-1X structure has the potential to hold over 2.5 million barrels gross mean recoverable resources. The well is expected to spud in the coming weeks.

United will be releasing its results for the full year ending 31 December 2021 on the 26 April 2022. In advance of this, the Company will provide its usual quarterly production update for Q1 2022. 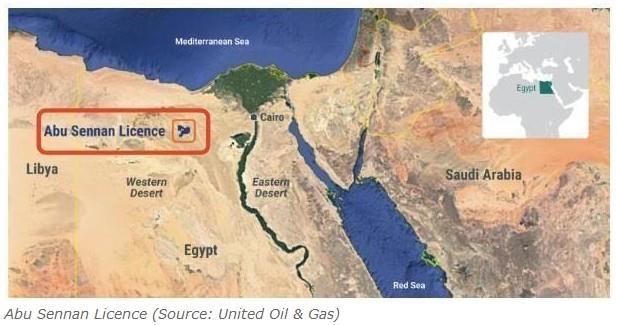 'We are really pleased with the result from the ASD-2 well, which provides a very positive start to the 2022 drilling campaign. Our production is highly leveraged to the current higher oil prices and oil/gas discoveries can be quickly brought on stream through existing facilities, generating immediate revenue for the Company. There remains significant potential within the Abu Sennan licence, and we are looking forward to drilling the upcoming ASV-1X exploration well. This well is targeting a United estimate of over 2.5 million barrels gross mean recoverable resources.  The rig has been mobilised and we look forward to the well spudding in the coming weeks.'