Gabon to offer offshore blocks in 12th Round

The Republic of Gabon has announced that it plans to open its highly-anticipated 12th Shallow and Deep Water Licensing Round of open blocks at the 25th Africa Oil Week, Cape Town in November 2018.

H.E. Pascal HOUANGNI AMBOUROUE, Minister of Oil and Hydrocarbons, will make the announcement during a special session within the main auditorium of the Africa Oil Week event at 08:50 on Wednesday 7th November 2018. This announcement will immediately be followed by a technical and fiscal workshop that will detail the new petroleum code, the license round and associated terms.

This workshop will take place at 11:00 in the Southern Sun hotel on Wednesday 7th November 2018 and the agenda will include further details of available blocks, the fiscal terms, timings and conditions of the 12th Gabon Licensing Round.

The Minister of Oil and Hydrocarbons will also advise the dates and venues of the associated global licence round Road Shows, supported by Spectrum. 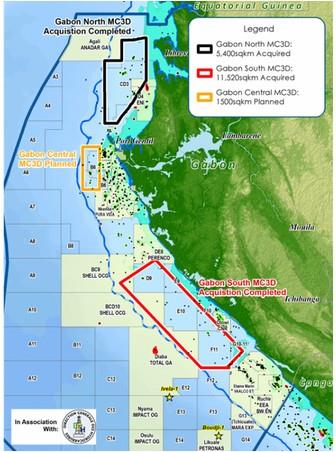 Spectrum, in collaboration with the Direction Générale des Hydrocarbures (DGH) has undertaken a number of shallow water 3D seismic surveys across the open blocks available in the 12th License Round. This data provides the industry with state of the art 3D broadband data. A variety of plays are targeted to allow a new generation of oil exploration in these prolific basins.

Seismic has been acquired in both north and south of the country. The 11,500 km2 southern survey, now complete, is the definitive dataset to image the pre-salt and, for the first time, intra syn-rift plays can be targeted. In the North, acquisition of a 5,500 km2 3D survey images pre and post-salt targets.

Data is available now for License Round evaluation facilitating immediate activity when the blocks are awarded.