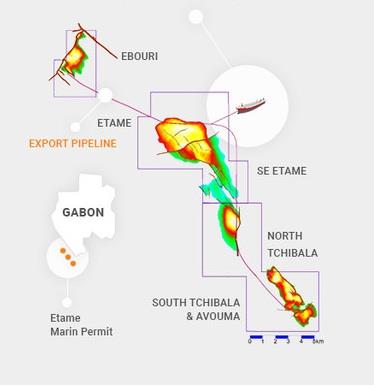 'We believe that the acquisition of Sasol’s interest at Etame is a very attractive and value accretive strategic acquisition for the Company that confirms our position as one of the leading independent exploration and production companies in West Africa. In what was a competitive sales process, this is the ideal growth transaction that we have been seeking for VAALCO. We believe the acquisition of an additional stake in this field that we know so well, having been the operator since 1995, is an important step in implementing our strategy. The acquisition is expected to deliver a step change in our production to over 9,000 barrels of oil per day net based on current production and significantly boosts our cash flow profile. With minimal additions to our overhead costs, we expect this transaction to lower our G&A cost per barrel by approximately 40%. The strong operational and economic performance of Etame in recent years has enabled us to grow our net cash position, which we are now using to fund this value accretive acquisition and profitably expand our reserve base.'

Bounds continued: 'We completed a highly successful drilling program earlier this year that demonstrated the quality of the asset and the upside that resides in the field, and this transaction, coupled with our recent announcement of acquiring new proprietary 3-D seismic data over the entire Etame Marin block, underscores the belief that we have in the long-term potential at Etame.   We are also enhancing upside potential with a 40% non-operated position in Block DE-8 offshore Gabon which includes an existing discovery and for which there are plans to potentially drill an appraisal well in 2021 representing an exciting near-term catalyst. In summary, as we have previously stated, we are focused on maximizing the value of our Gabon resources as well as expanding into new development opportunities across Africa.'

The Company has agreed to total cash consideration for both properties of approx. $44 million. The effective date of the transaction is July 1, 2020, and the Company anticipates that the transaction will close within 90 days. Cash paid at closing is expected to be less than $44 million as the amount paid will be subject to certain customary financial adjustments, including adjustments to account for estimated positive net cash flows attributable to the period from the effective date until the closing date. VAALCO plans to fund the net cost of the transaction with cash on hand and cash from operations. The SPA contains customary closing conditions including receipt of all necessary written consents, approvals or waivers, and provides for certain contingent payments of up to $6 million, as discussed below. Reserves, production and financial results for the interests being acquired will be included in VAALCO’s results for periods after the closing date of the transaction.

The metrics provided in the table below reflect Company management’s estimate of the positive impact of the acquisition on VAALCO’s key metrics.

Under the terms of the SPA, VAALCO is acquiring a 40% non-operated participating interest in Block DE-8 offshore Gabon, with Perenco, the operator, holding the remaining 60%. Block DE-8 is in shallow waters and encompasses multiple producing fields that are not part of the transaction and are carved out of the contract area that VAALCO is acquiring. The SPA includes an interest in the Akoum-B discovery on Block DE-8 that was drilled in 2003 and has a potential appraisal well planned for 2021. If the appraisal well is successful, it could be tied back through a subsea completion to a Perenco-operated existing platform on Block DE-8.

Under the terms of the SPA, a contingent payment of $5 million will be payable to Sasol by VAALCO if Brent oil pricing averages greater than $60 per barrel for 90 consecutive days during the period from July 1, 2020 to June 30, 2022. There is an additional contingent payment of $1 million if the DE-8 appraisal well is successful.