VAALCO Energy has provided an update on its 2019/2020 drilling program Offshore Gabon. 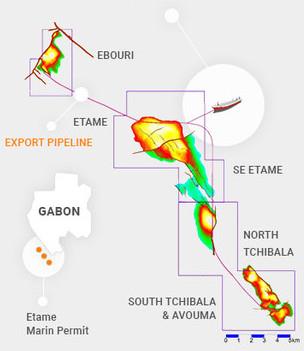 'We are very excited with the continued success that we have had in the 2019/2020 drilling program thus far as we demonstrate the development potential from the Etame field. The very strong stabilized net rate of 1,500 BOPD from the Etame 9H well is a significant first step toward increasing overall production by approx. 25% in 2020 compared to 2019.  With the Etame 9H well online, we expect our 2019 net exit production rate to average 4,500 to 4,700 BOPD, 16% higher than our previous estimate of 3,800 to 4,100 BOPD net to VAALCO.

We are in the midst of drilling the Etame 11H development well which will likely be followed by a workover on the Etame 10H well to replace the ESP. The Etame 10H workover, if undertaken, could restore additional production of 735 gross BOPD, or 200 BOPD net to VAALCO.  We then plan to move the rig to the SEENT platform to drill the SE Etame 4P appraisal well, which could confirm additional development well locations in the Gamba reservoir.

We are executing on our strategic plan, building positive momentum into 2020 and remain focused on maintaining our record of operational success.'

VAALCO reached total depth of approx. 8,900 feet in the Etame 9H development well and drilled and completed approx. 1,000 feet of the horizontal section within the Gamba reservoir.  The horizontal section is at the top of the Gamba structure where the high-quality reservoir is approx. 45 feet thick.  After installing production equipment, the well was brought online at a stabilized rate of 5,500 BOPD gross (1,500 BOPD net to VAALCO), with no H2S which compares to the previously disclosed pre-drill expected stabilized initial production rate of 2,500 to 3,500 gross BOPD (675 to 960 BOPD net to VAALCO).  By year-end 2019, VAALCO expects to convert approximately 6.2 million barrels of gross undeveloped 2P oil reserves to developed 2P oil reserves.  The Etame 9H development well was drilled and completed as planned, with no safety or environmental incidents.

Shortly after completion of the Etame 9H development well, the Company began drilling the Etame 11H horizontal development well from the Etame platform, targeting the same Gamba reservoir at a different location in the Etame field.  If successful, the Etame 11H well is expected to result in additional production of 2,500 to 3,500 gross BOPD (675 to 960 BOPD net to VAALCO) coming online in late January 2020.

After completing the Etame 11H well, VAALCO plans to execute a workover to replace the electric submersible pump (ESP) in the Etame 10H well on the same platform.  The Company then plans to move the rig to the Southeast Etame/North Tchibala platform to drill the SE Etame 4P appraisal wellbore to evaluate a Gamba step out area in Southeast Etame.  Upon drilling this second appraisal wellbore, the drilling commitment as part of the PSC extension that VAALCO signed last year will be complete.  As discussed in the past, if the SE Etame 4P appraisal wellbore indicates the presence of hydrocarbons in the Gamba reservoir then VAALCO, subject to approvals from joint interest owners and governmental authorities, plans to drill a third development well as part of the 2019/2020 drilling campaign.

VAALCO holds a 31.1% working interest in the Etame Marin Block, located offshore Gabon, which to date has produced over 110 million barrels of crude oil and of which the Company is the operator.