Through the end of October, 38 rigs (jackups, semisubmersibles and drillships) have been retired so far in 2020. Of that total, 24 were 30 years or older, but four of the five drillships removed from the fleet this year were 10 years of age or younger, with the fifth only a few months over 10 years. The 9.2-year average attrition age for drillships in 2020, as shown in Figure 1, is a stark contrast to 36 years for the 17 jackups and 27 years for the 16 semi retirements. 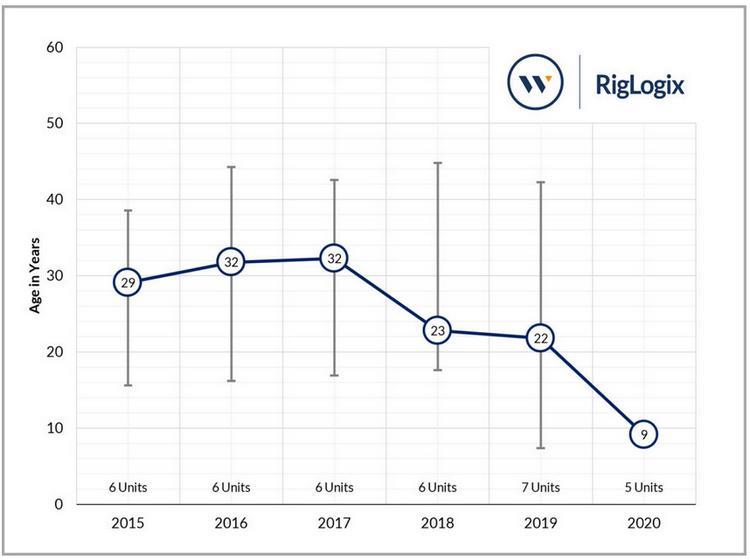 The five drillships retired so far in 2020 were owned by Valaris and Noble Drilling. Looking at their history, there are a few eye-catching numbers, but one stands out. Only two of the five EVER earned a dayrate under $350,000. A rate of $250,000 was paid for one rig during a 150-day shipyard stay, while the other earned $200,000 to $230,000 for two standby periods, plus a few sublet contracts that were below $200,000. During the rigs’ histories, the lifetime contract revenue for each rig ranged from $600 million to a little over $1 billion, but none had worked for more than eight years at the time of retirement. Two of the five had past due Special Periodic Survey (SPS) dates.

Individually, the Valaris DS-3, Valaris DS-5 and Valaris DS-6 were delivered between 2010-2012, at build costs of $730 million, $720 million and $745 million, respectively. The other two units, sister rigs Noble Bully I and Noble Bully II, were both delivered in 2011 at a cost of $600 million each. The lifetime revenue to construction cost ratios for these five rigs ranged from 0.9x to 1.6x, probably not what a rig owner might expect when ordering a rig. We should mention that none of the figures used in this report have been adjusted for inflation, nor account for operating expenses incurred throughout their lifetime.

Within the current fleet of 100 drillships (excluding 17 units under construction), RigLogix data in Table 1 below reveals that there are 14 units that have been inactive for two or more years and have their SPS overdue or due this year. Moreover, 11 of these units are currently cold stacked and eight of those 11 are less than 10 years old. Among the 14 drillships listed, only three have earned revenues 2x or more their construction cost, and two of the rigs have earned $0 in revenues as they have not worked since they were delivered. In contrast, some rigs retired before 2020 had a much higher revenue versus construction cost ratio. The GSF CR Luigs (retired in 2018), for instance, earned lifetime revenues 4.7x its $383 million construction cost.

Table 1: Drillships that have been inactive for more than two years and have SPS overdue or due in 2020 (Source: RigLogix) 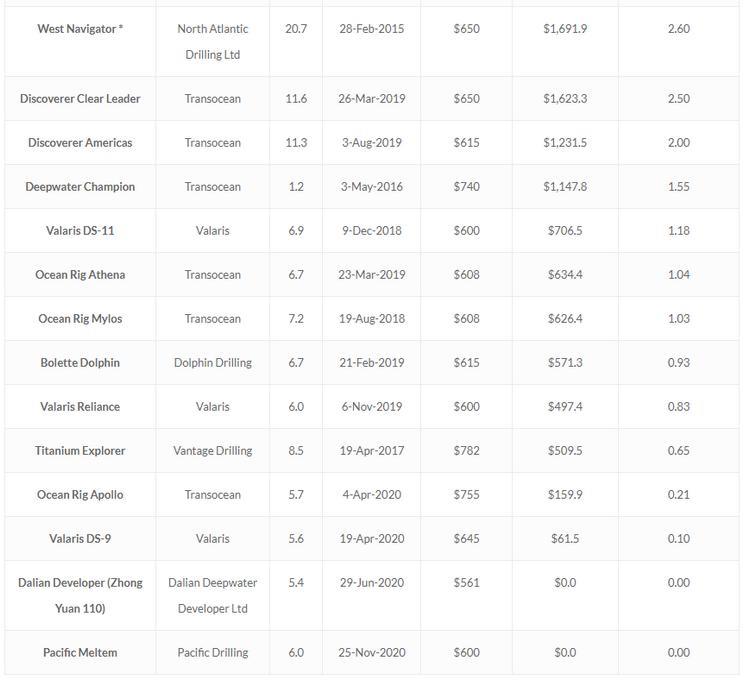 * Calculated from 10 years of full dayrate history (2005 – 2014). Rig names in bold indicate a complete dayrate history was used in the calculations. Figures not adjusted for inflation. Rig ages as of October 31, 2020.

Most rig owners are far from payback for rigs they ordered in the previous building boom, where construction costs ranged from around $500 million to over $800 million.  The odds are not very good that more than 1-2 of the rigs on the above list will ever make their way back into the fleet given that the $500,000 to $735,000 dayrates many of these rigs earned for a few years are not likely to be seen again, and with reactivation now in the $40 million to $50 million range, considerable losses will be realized upon retirement in some cases.

There are, of course, other drillships not on the above list that will be retired. In fact, when looking at many of the same factors, including rig status, age, next SPS due date, etc., RigLogix data indicates that an additional 17 units are judged to be potential retirement candidates. Of the 31 total attrition candidates on our list (these 17 plus the 14 from the above table), 19 are owned by Seadrill, Transocean and Valaris combined and most were ordered in the last rig building boom between 2010 and 2012.

Predicting future rig attrition is not an exact science, but there are certain metrics that can help identify those rigs, and we believe that the lifetime revenue versus construction cost can help to spot potential attrition candidates. Rig owners aim for a 10-15% annualized ROI when ordering a rig. Since the highest annual ROI of the five units retired so far in 2020 was an estimated 6%, it should be assumed that going forward, a 10-15% ROI for any drillship left in the fleet is unlikely, and a new norm of perhaps one-half of that range will become the new norm. It likely also means that finding the financing to order a new rig will be considerably more difficult in the future.

The combination of the Covid-19 pandemic and oil price decline have put rig owners in a precarious situation. So far, Noble Drilling, Diamond Offshore, Valaris and most recently Pacific Drilling have filed for Chapter 11 bankruptcy protection, and other rig owners are likely to join that list sooner rather than later. Industry consolidation is a hot topic today, and in the current climate, any deals done will likely be in an all stock or non-cash transaction. One possibility is those companies currently going through Chapter 11 bankruptcy will have a clean balance sheet and could look to buy a rig(s) or merge with a competitor as they come out of the process.

The industry cannot retire its way out of the current oversupply and an increase in rig demand will have to take place to balance the market.  Relief is some way off and dependent on oil prices.  For the drillship fleet, Westwood’s high-case demand forecast for 2021, assuming a $50/bbl oil price, shows utilization increasing by only about 2% over the predicted 65% for 2020, before increasing to just over 85% in 2022, which assumes Brent oil prices recover to $60/bbl.