The average monthly discovered volumes so far this year are estimated at 810 million boe, a 34% drop from the same period last year. This year could be on track to repeat the 2019 predominance of gas discoveries, with 55% of the volumes discovered so far being categorized as gas. The top five largest discoveries account for about 68% of the total discovered volumes.

The monthly average was pulled down primarily by June, which only saw three small onshore discoveries, adding around 16 million boe in discovered volumes. January and May were the most successful months in 1H20 due to significant discoveries such as Jebel Ali in the United Arab Emirates, Maka Central in Suriname, Uaru in Guyana and 75 Let Pobedy in Russia.

'Last year we saw the highest volumes of discovered resources since the last downturn. Based on the large number of high-impact exploration wells planned for this year, 2020 was meant to follow the same path. But then Covid-19 struck and the oil market crashed in 1Q20, resulting in delays and cancellations as operators cut budgets,' says Rystad Energy’s upstream analyst Taiyab Zain Shariff. 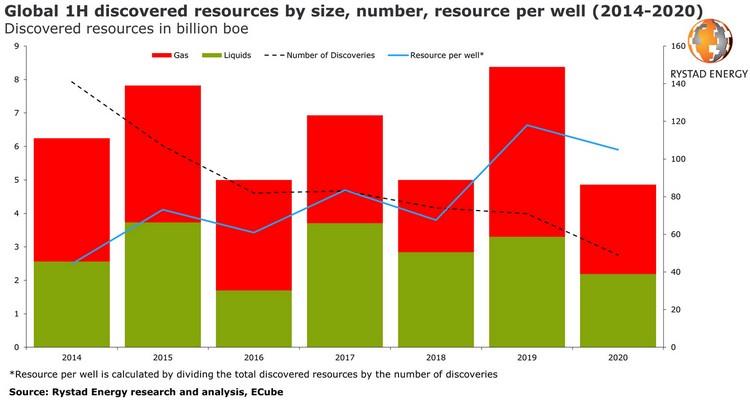 There were a total of 49 conventional oil and gas discoveries during the first half of 2020, of which 27 were announced during the global lockdown and travel restriction period. While these travel bans and the associated logistical issues didn’t have much of an effect on projects in the testing and completion phase, they did cause delays for projects in the initial and ongoing drilling phase that required crew changes. This could be one of the reasons for the lower number of discoveries in May and June.

A total of 14 high-impact wells (HIWs) have been completed so far this year. Of these, three have resulted in medium-sized to large discoveries, nine were dry or had uncommercial hydrocarbon shows, while results are still pending for the remaining two. It is estimated that the wells that have come up dry targeted cumulative estimated pre-drill resources of more than 2.5 billion boe.

Drilling was in progress on an additional four high-impact wells as we passed the half-year mark, though the SAX01 well on BP’s Shafag-Asiman block in Azerbaijan has been temporarily suspended due to the Covid-19 travel bans. Another 11 high-impact wells are expected to be drilled before the end of 2020, including key wells in the Suriname-Guyana basin, Southern Africa, Timor-Leste, Norway and the frontier areas of Russia.

'Although we look forward to these wells being spudded before the end of this year, a few delays may still arise because of Covid-19-related logistical issues that may come up as a result of the expected second wave of the pandemic,' adds Shariff.

The in-progress and planned high-impact wells have the potential to add up to 5.0 billion boe to the global tally. But with the unpredictable oil markets, and operators’ budget cuts on top of the Covid-19-related logistical issues, oil and gas exploration faces major challenges. It is estimated that the global offshore exploration activity this year might reach its lowest point in 20 years, with discovered volumes falling even lower than they were in 2016.