Block Energy, the exploration and production company focused on Georgia, has entered into a sale and purchase agreement ('SPA') with Schlumberger to acquire its subsidiary Schlumberger Rustaveli Company Limited ('SRCL'). Of the three production sharing contracts ('PSCs') currently held by SRCL in Georgia, the Company will acquire producing Block XIB and exploration Block IX. It is agreed that Schlumberger will apply to relinquish Block X.

The Acquisition significantly increases Block's access to production, reserves and resources. It represents a major milestone towards the Company's objective of becoming the leading independent oil and gas producer in Georgia. Completion of the Acquisition is conditional upon regulatory approvals in Georgia and the United Kingdom.

'We are extremely pleased to announce the acquisition of the PSCs for Block IX and Block XIB in Georgia from Schlumberger.  The Acquisition is transformational for Block Energy, providing the Company scale and increased production, reserves and resources. A critical component of this transaction is that it will be completed with no cash consideration, using options on our own share capital. The Acquisition demonstrates management's ability to identify, compete for and secure the right deals for its shareholders in an environment posing unprecedented challenges for the industry. We have posted a short presentation on our website www.blockenergy.co.uk  and look forward to completing the deal and updating the market further with a work programme for the enhanced integrated portfolio.'

Rationale for the Acquisition

The Acquisition from Schlumberger represents a significant step in scale for Block Energy, increasing its acreage by over 30 times. Once completed, the Acquisition will immediately boost production by 245 bopd, 2P reserves of oil and gas by 64 million boe, 2C contingent resources by 29 million boe and add significant upside potential of 245 million boe of prospective resources.  Block will have total licence area of 2,622 km2, giving it a material position in Georgia's oil and gas fairway.

Block XIB has a cost recovery pool of US$103 million, which has been approved by the state, plus an additional US$30 million expenditure during 2019 subject to state audit. Block XIB is producing from the Middle Eocene, the same geological horizon as targeted in West Rustavi. However, with its greater reservoir thickness and area it offers far larger potential.

The Company has prepared an exploitation plan for the new assets and when integrated with Block's existing operations, the acquired assets will bestow significant operational synergies that will enhance the Company's operational ability and efficiency.

Block XIB covers 615 km2 and is the largest ever-producing asset in Georgia with over 180 million bbls of oil produced. It is located in the Kura Basin and is charged by a well-proven petroleum system. Production to date has been predominantly from the Middle Eocene. Only four wells have been drilled since 2009, three drilled pre-2017 by a former licensee and one, PAT-E1, in 2018/2019 by Schlumberger. Schlumberger's focus was appraisal of the natural gas in the Lower Eocene and Upper Cretaceous.

Block XIB benefits from 3D and 2D seismic coverage. The 3D seismic was recently reprocessed by WesternGeco and will be merged with that acquired by Block over West Rustavi in 2019.  The Company's interpretation and understanding of the merged set will use production data and vintage and modern well logging information gained from the 233 wells on the block. The PSC has no remaining capital expenditure obligations and a remaining term of 14 years extendable by five years.  The approved cost recovery pool at 31 December 2018 was US$103 million with a further US$30 million of expenditure incurred during 2019 to be added, subject to audit by the state. The PSC has attractive fiscal terms especially in the current cost recovery phase. We are inheriting an appraisal and development plan targeting gas initially-in-place of approximately 600 BCF, following the drilling and testing of a deep appraisal well completed by Schlumberger in 2019.

A state-owned underground gas storage project is located within the boundaries of Block XIB and is in close proximity to the 600 BCF structure recently appraised by Schlumberger. The Baku-Tbilisi-Ceyhan pipeline ('BTC') and South Caucasus Pipeline ('SCP') pass through Block XIB. 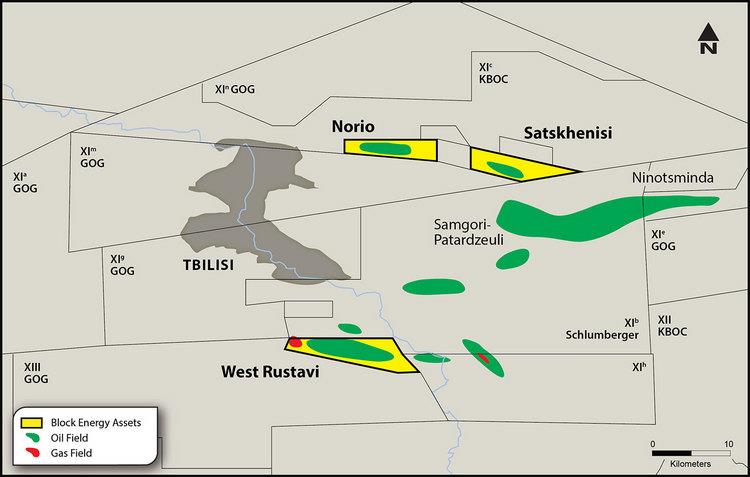 Exploration Block IX has an area of 1,925 km2 and is covered with 454 km of 2D seismic acquired in 2010 and 960 km of vintage 2D seismic. Block IX has 38 legacy wells, with two wells drilled in 2013 having oil and gas shows. There are several oil seeps in the block and numerous prospects and leads with hydrocarbon indicators identified on 2D. The addition of Block IX creates a balanced portfolio of significant exploration upside. Block IX allows the Company the option to evaluate and farm out some high-risk/high-reward drilling, offering scale for potential farm-in partners.

Consideration for the Acquisition will be satisfied by the issue of share options ("Options") that will give Schlumberger the right to acquire 120 million 0.25p ordinary shares, representing 23.3% of Block's enlarged ordinary share capital, at a nil exercise price ("Base Options"). SRCL is being acquired on a debt-free, cash-free basis. If it is determined that SRCL has net working capital assets following completion, Block will issue up to 10 million additional Options to Schlumberger. For this purpose, it is agreed that the Options are valued at US$0.05 each. This imputes a value to the Base Options of US$6 million. The agreed value of the Options represents a premium of 92% to the closing price of Block shares on 25 March 2020 of 2.2 pence. The Options are exercisable between 12 and 24 months from completion of the transaction, unless there is a change of control or general offer in respect of the Company, in which case they are exercisable immediately.

Completion of the Acquisition is subject to the fulfilment of the following conditions precedent within six months from the date Georgia's borders are reopened:

Prior to completion occurring, Block will coordinate with Schlumberger in order to ensure the smooth operation of the assets in the interim period and to exercise operational oversight. A further announcement will be made upon completion.

SRCL's unaudited accounts for the year ended 31 December 2019 showed net assets of US$4.1 million and a net loss of US$16.6 million. There was no revenue in 2019, because produced oil was delivered to the state to fulfil legacy contractual obligations. Prior to completion of the Acquisition, it is agreed in the SPA that the accounts will additionally include an impairment to assets reflecting a minimal book value.