Germany’s gas demand, which is currently just above 90 billion cubic meters (Bcm) per year, is set to increase to more than 110 Bcm by 2034, but as future supplies from Norway and the Netherlands dwindle, new imports must be sourced. A Rystad Energy comparative analysis shows that importing more Russian gas through the Nord Stream 2 project is the most reliable and cheapest option versus US liquefied natural gas (LNG) cargos and other intra-Europe pipe routes.

Data from the last complete year, 2019, shows that Germany – acting also as a gas transport hub – imported 55.5 Bcm of gas from Russia, 27 Bcm from Norway and 23.4 from the Netherlands, with the three countries accounting for 92% of German gas imports.

With the ambitious goal of decommissioning all nuclear power plants by 2022 and all coal power plants by 2038, German gas consumption is forecasted to rise as more gas-power generation will be needed to meet demand and to back-up the intermittency of renewable sources. Meanwhile, Dutch gas production has been declining at a fast pace as Groningen undergoes decommissioning and Norwegian output is at risk of declining after 2030.

'Germany’s dependency on gas imports will increase and it is therefore key to ensure access to reliable sources of gas and diversify the risk by adding new infrastructure that will allow direct supplies either as piped gas or LNG. If Germany decides price is the most important factor, Nord Stream 2 will go ahead, as it diversifies supply to the market, reducing the risk of high energy prices,' Carlos Torres Diaz, Rystad Energy’s Head of Power and Gas markets. 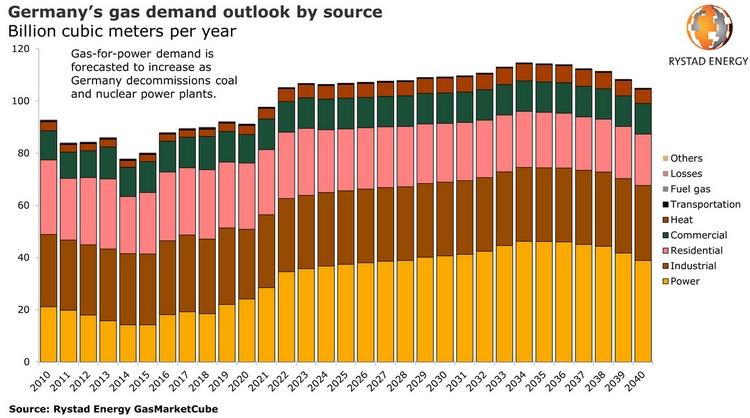 Germany is not only expanding its pipeline import capacity; there are plans to build three regasification terminals with a total capacity of 19.4 million tonnes (26.4 Bcm). Of the three projects, the Wilhelmshave FSRU plant is the one that has gathered the most traction and could be coming online by around 2023.

Although Germany currently has around 284 Bcm of theoretical pipeline import capacity, some of it comes from countries where production is declining (Netherlands) and the remaining capacity transits through third countries making Germany susceptible to external geopolitical tensions (eg. between Russia and Ukraine). To ensure direct access to new supplies the two real alternatives are additional supplies from Russia through Nord Stream 2 and to materialize the regasification plant plans.

Building Nord-Stream 2 allows Germany to better arbitrage between US and Russian gas supply and German buyers can leverage their position to negotiate better terms on supply deals.

Gazprom has been moving away from its traditional oil-indexed long-term contracts and has linked most exports to European hub prices. The company has made efforts (since receiving a large EU anti-trust fine in 2017) to offer European buyers a price closer to market value, through its electronic trading platform (ETP), which launched in September 2018, and now accounts for about 15% of sales.

The ETP has been trading very close to TTF prices. Both benchmarks have dropped to a level close to the Short Run Marginal Cost (SRMC) of US LNG delivered to Europe and below Gazprom’s legacy long-term contract price level making it clear that buying volumes on the spot market has been more competitive during the last year.

The SRMC of US LNG supplies to Western Europe is close to $4 per MMBtu. Going forward, this level is expected to serve as a price floor for European gas prices during loose market periods but overall, European gas prices are forecasted to gradually increase towards $7 per MMBtu in 2024 as the market tightens.

Therefore, it could be expected that German buyers would need to pay somewhere between $4-7 per MMBtu when sourcing LNG on the spot market. If they decide to go for the option of signing long-term supply agreements with US LNG sellers to reduce supply risk and price volatility, they could be expected to pay around $6 per MMBtu.

The estimated SRMC of Russian supplies to Western Europe ranges between $2.6 per MMBtu and $4.6 per MMBtu. It is estimated that the breakeven of gas supplies through Nord Stream 2 would be on the lower side of this range. It would be too speculative to estimate the contracted price for these volumes but if they are sold through Gazprom’s ETP they could be expected to have a similar level to TTF prices of $4 per MMBtu during loose market periods and closer to $7 per MMBtu during tighter market periods.

In summary, we see Germany benefitting from the Nord Stream 2 pipeline as it gets access to low-cost gas and reduces supply risk in bypassing third-party countries. Having access to LNG through their own regasification terminals will additionally allow Germany to reduce dependency on a dominant source of supply and gas buyers in the country can better optimize their portfolio by taking advantage of low-price periods in the LNG market.

If Nord Stream 2 isn’t built, Russian gas will still find its way onto European markets, and in large quantities. Russia has three main options to increase supplies to Europe – via LNG, by sending more gas via Ukraine or ramping up TurkStream flows. Ukraine has a total of 142 Bcm of transit capacity, of which Russia is currently only using a maximum of 65 Bcm in 2020 and 40 Bcm in 2021 and 2022.

Per the most recent deal reached in December 2019, Russia can send more volumes through Ukraine, just under slightly different pricing. Ukraine will gladly increase supplies and collect on transit taxes, but the risk is the aging infrastructure, which is due for upgrades, another reason for the new Nord Stream 2 pipeline.

If Nord Stream 2 is sanctioned out of commerciality, this would likely be a boon for global gas prices in the short term. Additionally, given the importance of the project, Russia is likely to have a strong response to such an outcome. This could mean a repeat of 2004 or 2009, when Russia turned off the gas taps via Ukraine, but more likely, such a strategy to cover potential losses caused by sanctions would backfire in the long-term. At the end of the day, market participants want reliable and fair-priced gas, and if Russia can provide this for Germany and other western European customers, Nord Stream 2 is likely come online in due time.