CGX Energy and Frontera Energy, joint venture partners in the Petroleum Prospecting License for the Corentyne block offshore Guyana, have announced today that, further to the announcement on November 28, 2022, due to circumstances beyond the reasonable control of the Joint Venture related to ongoing exploration activities by a third-party operator that have delayed the release of the NobleCorp Discoverer drilling unit contracted by CGX, the Government of Guyana has agreed with the Joint Venture's declaration of force majeure regarding Phase Two of the Second Renewal Period of the Corentyne Block Petroleum Agreement and a corresponding extension of the License to January 31, 2023. 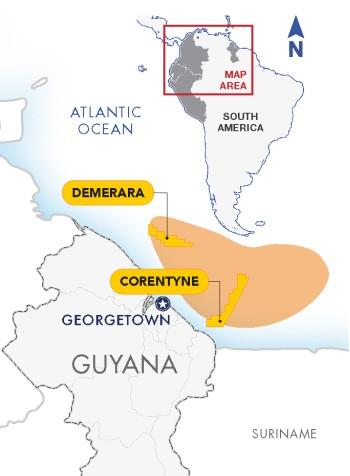 The Joint Venture remains committed to executing its drilling activities in the Corentyne block and the declaration of force majeure is a procedural step which preserves the Joint Venture's interests in the License. The Government of Guyana has confirmed that the Petroleum Agreement for the Corentyne block and License will remain in full force and effect and good standing.

The Joint Venture also announces that it has completed the previously announced agreement to amend the Joint Operating Agreement originally signed between CGX and a subsidiary of Frontera on January 30, 2019, as amended (the 'JOA Amendment'). All conditions precedent to the JOA Amendment have been satisfied. As a result of the JOA Amendment, CGX has a 32.00% participating interest and Frontera has a 68.00% participating interest in the Corentyne block, pending the filing of customary documentation with the Government of Guyana.

'The Joint Venture is well-prepared and excited to begin Wei-1 well drilling operations, scheduled to spud in January 2023. All pre-drill activities are complete and all necessary services, materials and support vessels are contracted. Declaring force majeure is a necessary step in preserving the Joint Venture's interests in the Corentyne license. We are grateful for the ongoing support and understanding we have received from the Government of Guyana as we mutually work to unlock the potentially transformational opportunity before us in the Corentyne block. With the JOA Amendment now concluded, additional funding for the drilling of Wei-1 is secured and CGX has a clean balance sheet with no loans and encumbrances. We now look forward to the drilling of Wei-1 and the potential extension of the Kawa-1 discovery in the northern section of the Corentyne block.'

'The Joint Venture continues to operationally and commercially progress its investments in Guyana. Over the last few months, we've filed a Notice of Potential Commercial Interest regarding Kawa-1, and we've reached agreement with the Government of Guyana that the Wei-1 well will be spudded no later than January 31, 2023, thus ensuring that the Corentyne license remains in full force and effect and good standing. Looking ahead, we are firmly focused on building on the Joint Venture's recent light oil and condensate discovery at the Kawa-1 well and successfully spudding the Wei-1 well and the tremendous opportunity that is now before us on the Corentyne Block in one of the most exciting exploration areas in the world.'