Conrad Asia Energy has received notification that it has been named as the winning bidder for the Offshore North West Aceh ('ONWA') and Offshore South West Aceh ('OSWA') PSCs located offshore northwest and southwest of the Aceh Province of Indonesia. Conrad will operate and hold a 100% Participating Interest in both blocks. 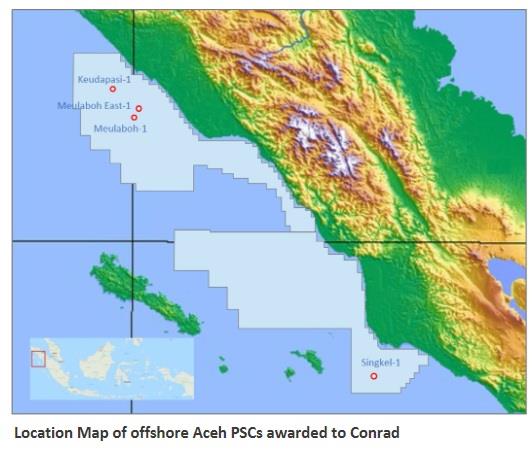 In November 2018, Conrad was granted two Joint Study Areas ('JSAs') located offshore northwest and southwest of the Aceh Province. ONWA and OSWA were offered under the Indonesia Petroleum Bidding Round (IPBR) 2022 first licencing round, in which Conrad submitted bids on the 5th of September 2022. Due to the deep-water environment and the lack of exploration in large parts of each block, notwithstanding the existing discoveries in the shallow water, the blocks are deemed by the Indonesian authorities as 'frontier' with corresponding fiscal arrangements which are attractive and favourable compared to other Indonesian PSCs. The deeper water areas are underexplored, but recent seismic surveys have delineated leads with multi TCF potential, with existing seismic showing flat spots and gas chimneys, indicating evidence of the presence of hydrocarbons.

On the 8th of November 2022, the Ministry of Energy and Mines of Indonesia announced that Conrad had submitted winning bids for both blocks. Conrad has 60 days from the announcement to discuss and formally accept the offers with the relevant authorities. The total committed work program for each PSC is US$15 million and includes geological studies for 2023, 500 sq kms of 3D seismic acquisition for 2024 and the drilling of a well for 2025. While the initial costs will be funded through the Company’s recent public listing on the Australian Securities Exchange most of the funding will come from farm in partners as the PSCs are progressed and the commencement of cashflow from the Mako gas field.

The PSCs contain hydrocarbon potential around the existing shallow water gas discoveries close to shore and in the underexplored deep-water portions of the blocks. The water depths in the two working areas vary between 5 metres and 1,500 metres, with the existing discoveries located in water depths of less than 100 metres. These discoveries were made in the 1970’s, at a time of low gas prices and little regional demand. These shallow water discoveries are in geological formations known as 'pinnacle reefs' where the Company has already identified another seven leads to mature for future drilling. Historical drilling success rates in these shallow water areas has been around 35%, using older 2D seismic data. Conrad intends to acquire 3D seismic data in the most prospective areas, where it expects to achieve higher exploratory success rates, further de-risking the exploration potential.

The ONWA block comprises total acreage of 9,182 square kilometres and contains the Meulaboh-1 and Meulaboh East-1 gas discovery wells. The OSWA block covers 10,700 square kilometres and contains the Singkel-1 gas accumulation. These discoveries have all been successfully flow tested at commercial rates and are close to shore, offering near-term, low-cost commercialisation opportunities.

Conrad is in the process of obtaining a third-party competent persons report for the known gas discoveries in both blocks. Conrad intends to initiate independent prospectivity reviews of the deep-water exploration potential of the PSCs.

'The award of these two PSCs is a transformational event for Conrad as these blocks contain discoveries that significantly increase our resource base and offer the opportunity for Conrad to add several gas projects to its existing large Mako gas project. Conrad’s initial scoping study of gas markets in the region has been positive and we are optimistic of commercialising these discoveries.

The potential upside for Conrad is the exploratory opportunity in the deep water, where we have already identified a host of high impact gas plays. These are potentially each multi trillion cubic feet in size, with gas chimneys and flat spots, indicating evidence of hydrocarbons. Our best leads are in 1,000 metres of water which by global standards is not deep. Conrad has a 100% working interest in these blocks and will be seeking partners to join the exploration efforts in these areas.

We are delighted to have been awarded these PSCs, where we first started to evaluate the prospectivity some 4 years ago. These blocks are consistent with our company strategy of being focussed on gas in offshore locations within Asia, in order to
build our gas portfolio in the region.'