Interra Resources has announced the commencement of drilling of the Company's first well in the Kuala Pambuang block ('KP') onshore southern Central Kalimantan, Indonesia. Interra has a 67.5% working interest in the Block through Mentari Pambuang Internasional, the operator of the 1,631 km2 Block as well as the drilling of the KP-1 exploration well. 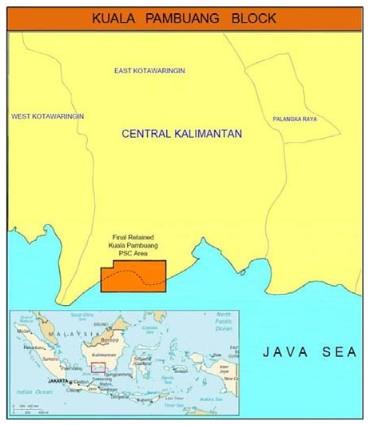 The KP petroleum ‘play’ was originally based on reports and maps in the possession of the operator describing numerous producing oil wells that were drilled pre-World War II by a subsidiary of the Royal Dutch Shell. These Dutch Wells were drilled to depths of 900 to 1,100 metres and most encountered three prospective oil reservoirs – a shallow clastic sandstone (Warukin formation) and two deeper limestones (upper and lower Berai formation).

KP-1 will be drilled as a vertical well to a planned total depth of approx. 1,100 metres employing a hired drilling rig, and is expected to intersect the same oil reservoirs that were encountered in the Dutch Wells.

The lower Berai formation had the highest oil influx rate both in testing and subsequent production, and is therefore Interra's primary target. The Berai formation potential reservoirs also correlate with more recent wells drilled in 1971 approximately 200 km to the east of the drill site. 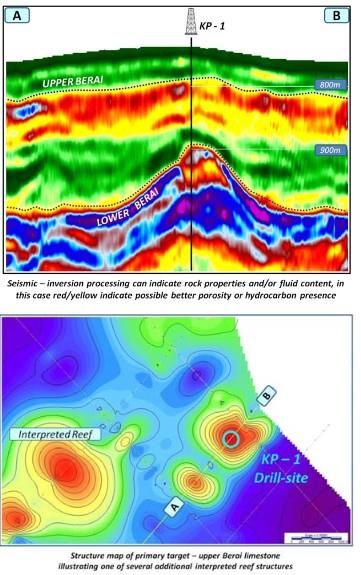 The most impactful of the data collected is the over 300 km of high quality 2D seismic data which clearly contain anomalies consistent with the limestone reservoirs reported in the Dutch Wells. Based on the new data, these are interpreted to be Berai limestone reefs with drape structures over them. The seismic data was processed using standard and advanced methods, the latter from which a prognosis of possible reservoir quality and/or fluid content can be made.

The unrisked prospective resources for the entire Block estimated as at 1 January 2019 by ERC Equipoise are: low case of 67 mmstb, best case of 305 mmstb and high case of 1,288 mmstb (refer to the Company’s 2018 annual report for further details). If the drilling results of KP-1 are commercially successful, then these prospective resources may be upgraded and re-classified as reserves. In addition, resource volumes in other prospective areas that have been identified by seismic will most likely have their classifications upgraded.

The Company will announce the results of the drilling operation as soon as they may be ascertained as well as updates reflecting critical or unexpected events during drilling.