Genel Energy has announced that all payments have now been received from the Kurdistan Regional Government (‘KRG’) relating to oil sales during July 2022. 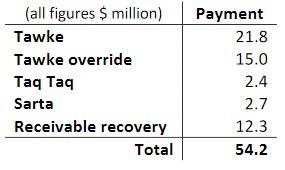 Genel was owed $120 million, excluding interest, for deferred receivables from the KRG for oil sales from November 2019 to February 2020, and has now received $130 million. In addition, the override was suspended from March to December 2020, which would have earned Genel $38 million.