Providence Resources, the Irish based Energy Company, has provided the following corporate update.

Exola DAC, a subsidiary of Providence and operator of the Barryroe field, has notified APEC that it has commenced the regulatory process required to transfer the 50% equity in Standard Operating Licence ('SEL') 1/11, which contains the Barryroe field, currently assigned to APEC, back to the original owners. This will result in Exola DAC and Lansdowne Celtic Sea reverting to their original 80% and 20% interest respectively on completion.

Exola DAC as operator of Barryroe has recommenced the farm-out process and a number of companies are actively assessing the field data. Following the Company’s review of the field’s resource potential, which confirms that there is a considerable gas resource within the Barryroe structure in addition to the recognised oil resource, which was the original focus of the farm-out process, several additional companies not included within the initial process have expressed interest in the gas potential and have been invited into the data room.

The Barryroe appraisal work programme is expected to include at least two appraisal wells and an extended production test. The Barryroe structure has been independently verified as containing large volumes of both gas and oil, and the proposed appraisal programme is expected to confirm the presence of either a large oil field with a gas cap or a large gas field surrounded by an oil rim. The programme will also assess reservoir continuity. The appraisal programme is being designed to directly address these reservoir uncertainties, and deliver the information required to support development planning ahead of an investment decision.

The independently verified reports of the hydrocarbons recoverable within the Barryroe field concluded that a mid-case of 346 MMBOE of 2C resources was present within the Middle and Basal Wealden sands.  (Note: 1BOE ~6SCF of gas).

Providence Resources is assessing the potential for a carbon neutral gas development as an option for the Barryroe field. Several nearby depleted gas fields are being prepared for decommissioning, and a number of industry studies have assessed their potential for carbon sequestration (CO2 storage within the depleted gas fields). It may be possible to minimise the carbon footprint of a Barryroe development by recycling some of the existing pipelines and infrastructure associated with the depleted fields and participating in a broader carbon capture initiative.

Exola DAC as operator of SEL 1/11 has received approval to apply for a site survey at a third appraisal location on the Barryroe field. This application was submitted to ensure all preferred appraisal locations are operationally ready. The application is subject to public consultation and review in accordance with applicable directives.

Following the appointment of a new Chief Executive Officer in early January, the board and management team are primarily focused in the short to mid-term on the successful appraisal of the Barryroe field and on finalising plans to facilitate its future development

All exploration licences are being re-assessed based on cost and relevance to the new business model.

Following on from the RNS dated 12 September 2019, which set out details of the September placing and the re-engineering of Providence’s business model, the Company advises that it currently has sufficient working capital to fund Providence’s costs through to the end of March/ early April 2020. The Company has completed its redundancy program and materially reduced the cost base. With the farm-out process continuing the Company confirms that additional funds will be required to provide sufficient working capital to support the business in the near term and the board is currently considering its funding options.

ENI has advised Providence that it plans to relinquish its interest in and operatorship of FEL3/04 which contains the Dunquin South prospect. The Dunquin North prospect which was drilled in July 2013, confirmed the presence of both reservoir and residual hydrocarbon within the structure; however, the reservoir was breached allowing hydrocarbon to migrate out of the structure. The Dunquin South prospect appears less likely to have been breached, based upon the high-quality 3D seismic available over the prospect and remains an attractive exploration prospect. Providence is preparing to farm out a material interest in the FEL3/04 licence on completion of the ENI relinquishment.

The Department of Communications, Climate Action and Environment in a letter dated 28 January 2020 to the JV partners (Total E&P Ireland Limited, Sosina Exploration Limited and Capricorn Ireland Limited) confirmed that the licence had been accepted for Voluntary Surrender with an effective date from 31 December 2019. 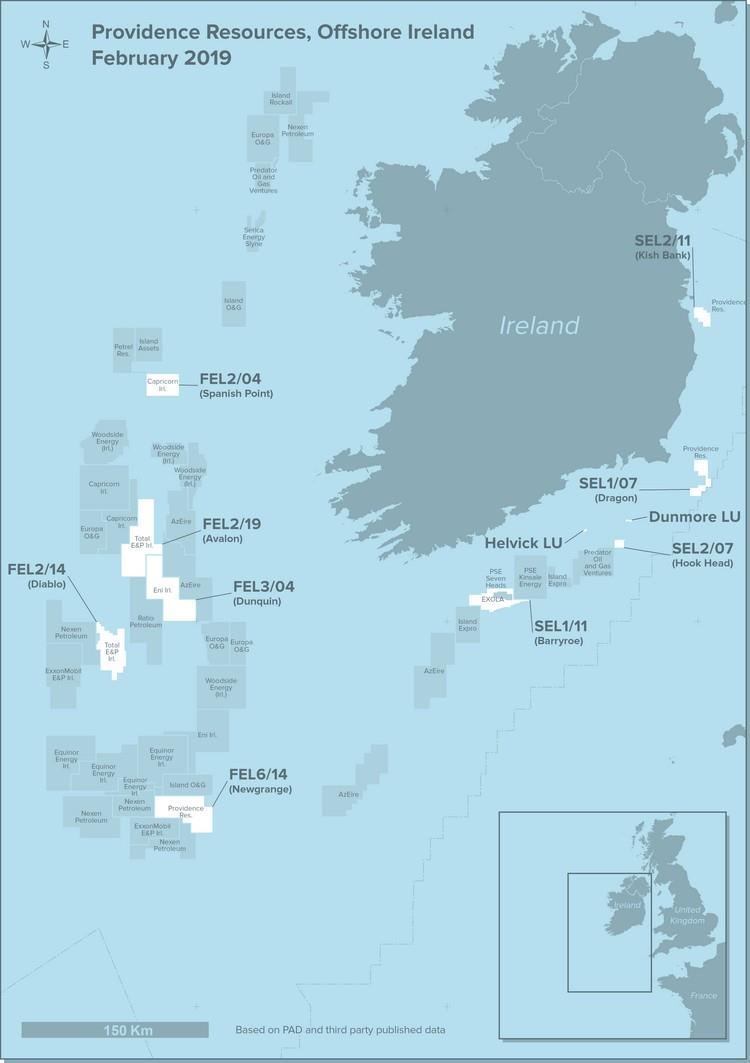