JV partner United Oil & Gas has announced the results of an independent Competent Person's Report ('CPR') prepared by ERC Equipoise Ltd ('ERCE') covering the Tullow Oil-operated Walton-Morant licence, offshore Jamaica. This includes an increase in Gross Unrisked Mean Oil Prospective Resources for the high grade undrilled Colibri prospect to 229 MMstb recoverable from 219 MMstb, and an increase in the geological chance of success. United holds a 20% equity interest in the 32,065 sq km Licence, with the remainder held by Tullow Jamaica, a wholly owned subsidiary of Tullow Oil.

ERCE was commissioned to update its 2017 volumetrics for the undrilled Colibri prospect following the acquisition of 2,250 sq km of state-of-the art 3D seismic data, the first ever acquired offshore Jamaica, in May 2018.  The CPR represents the culmination of a defined work programme to de-risk highly prospective Cretaceous and Tertiary-aged clastic and carbonate reservoir targets, including Colibri, that have been mapped by Tullow on 2D seismic data.  ERCE's updated volumetrics for Colibri are detailed in the table below: 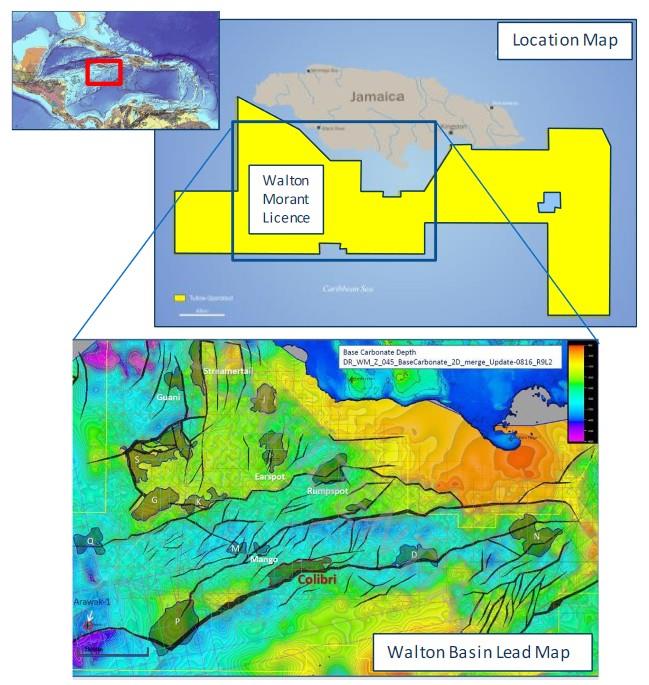 'The high-grade undrilled Colibri prospect has not only passed robust and comprehensive technical scrutiny by an independent third party, but ERCE has seen fit to upgrade the gross Mean Unrisked Prospective Resources to 229 MMstb and to increase the likelihood of success.  This is a standout outcome, as it is not uncommon for volumes to be downgraded when structures, that have previously been identified on 2D seismic, are mapped on a 3D dataset.  The upgrade in the resources assigned to Colibri is testament to the work carried out by the partners, the quality of the licence and the strength of the geological model we have put in place.  The next step for Colibri would be making the decision to drill what could be a transformational well for United and with this in mind we are working closely with Tullow on a forward plan for the Licence.

'Gross Unrisked Mean Prospective Resources of 229 MMstb are eye-catching, particularly for a company of our size.  While not included in this CPR, we have identified a number of other structures which we believe would be significantly de-risked were a well targeting Colibri to be successful.

'We have already seen considerable industry interest in the Walton Morant Licence.  This CPR and the ongoing seismic interpretation will provide additional impetus to the joint farm down process which we are confident will allow United to participate in this licence at a low-cost exposure, while continuing to offer considerable potential upside for shareholders.'