United Oil & Gas has announced that the fast track version of the recently acquired 3D seismic dataset over the Walton-Morant licence offshore Jamaica, has been delivered by the operator, Tullow Jamaica. Encouragingly, the high-grade Colibri target, which had previously been mapped on 2D seismic, has been clearly identified on the fast track version of the 3D seismic dataset.  This follows the completion of a 2,250 sq km 3D seismic acquisition survey on the Licence (see announcement of 14 May 2018 for further details).  United holds a 20% equity interest in the 32,065 sq km Licence, with the remainder held by Tullow, a wholly owned subsidiary of leading independent oil and gas exploration and production company Tullow Oil.

The 3D seismic survey, which is the first to have been acquired in Jamaica, forms part of a programme focused on de-risking highly prospective Cretaceous and Tertiary aged clastic and carbonate reservoir targets that have been mapped by Tullow on 2D seismic data.  Among these is Colibri, which has been estimated from 2D data to hold gross mean-case prospective resources of over 200mmbbls.  The technical case for Colibri has been further strengthened by the recent identification of an active thermogenically derived offshore oil seep to the south of the structure.

Initial opinion is that the fast track 3D seismic data is of excellent quality with the Colibri structure clearly visible on the newly acquired dataset.  Processing and interpretation work is now underway and the Company will provide a further update to the market once this has been completed and final volumes are available. 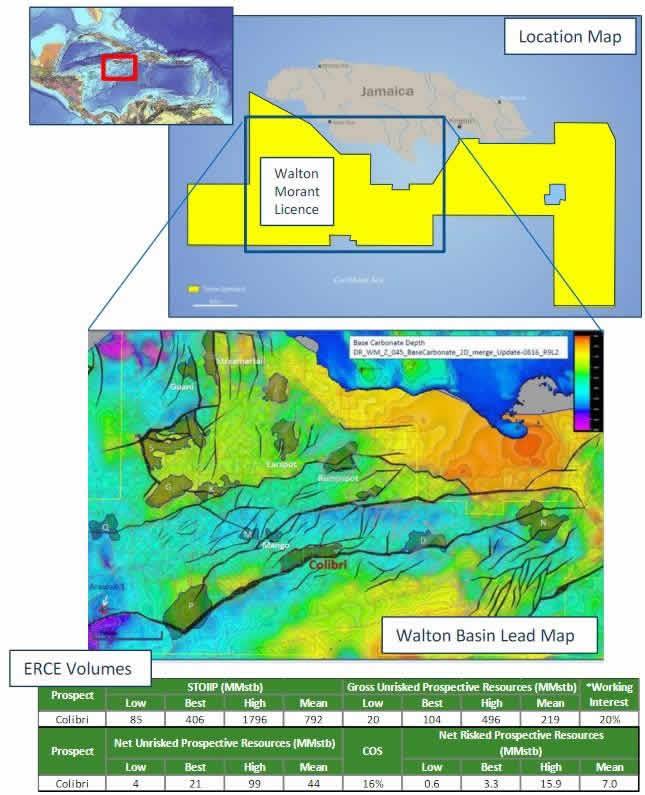 'The work programme to de-risk the 200mmbbl Colibri target on Walton-Morant continues to proceed on schedule and under budget.  Being able to clearly identify Colibri on the 3D seismic at such an early stage is highly encouraging and with this in mind, we are looking forward to the processing and interpretation work being completed.

'United has a dual focused strategy to expose shareholders to multiple near-term value drivers from its portfolio of low-risk development and appraisal assets in Europe and potentially transformational exploration projects in Latin America, the Caribbean and Africa.  Our 20% interest in Walton-Morant represents high impact exploration, however, near-term needle-moving activity is not confined to Jamaica.  In Europe, the Podere Maiar gas discovery in Italy is being progressed through the permitting process ahead of being brought into production; while in the UK, the near-shore Colter Discovery, which lies in the same play as the prolific Wytch Farm field, is due to be drilled in Q4 2018.  Activity with significant re-rating potential is being undertaken across our portfolio and I look forward to providing further updates on our progress.'

The large 32,065 sq km Walton Morant Licence, offshore Jamaica, is exposed to a number of different plays across three geological basins including the Walton and Morant Basins.  To date, only 11 wells have been drilled across the whole of Jamaica's onshore and offshore, and despite challenges with well placement due to a lack of seismic control, 10 of these encountered hydrocarbon shows. Oil-prone source rocks have been identified in the Eocene and in the Cretaceous, with migrant oil identified in onshore wells and outcrop samples. This provides good evidence of the presence of regional source rocks.

Recent work, including extensive onshore fieldwork, has confirmed the presence of all the elements required for a working petroleum system, and has also identified a thermogenically derived offshore oil seep close to Colibri, the main prospect of interest, providing further confidence that there is the potential to find significant commercial volumes within the Licence.  Colibri has been high graded on the basis of its position in relation to migration routes out of an identified Eocene kitchen.

Tullow entered the Walton-Morant licence in November 2014.  In addition to securing a large portfolio of legacy 2D seismic data, Tullow also acquired a further 3,650 km of 2D seismic in 2016 and 2017.  Interpretation of the data set has identified attractive Cretaceous and Tertiary aged clastic and carbonate reservoir targets.  The 3D seismic survey is designed to further de-risk these targets, including the Colibri lead.