The Liberia Petroleum Regulatory Authority (LPRA), has announced the launch of the next licensing round, expected to commence in April 2020.

In a meeting held between NOCAL, LPRA and TGS, the next steps were unanimously agreed, to allow the government of Liberia to conduct a successful license round and thereby to attract the right investors to this promising exploration region. 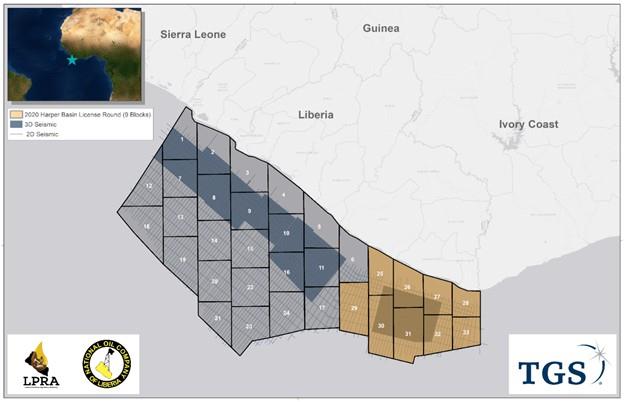 Nine blocks will be on offer in the Harper Basin, one of the last unexplored and undrilled regions offshore West Africa. TGS holds a range of multi-client data across this acreage to support the licensing round, including 5,272 kms of 2D and 6,276 sq kms of 3D seismic, gravity and magnetic data.

Syn-rift structural traps can be identified over much of the area, which offer multi-level prospectivity, with direct analogues to producing fields in neighbouring basins. Modelling predicts the source rock maturity and expulsion post-dates the main tectonism in the basin, and seal presence is evident in West African Transform Margin analogues. Also, Cretaceous slope and basin floor fan systems demonstrating high amplitude character have been identified, some of which cover over 300 square kilometers. Volumetric assessment of these features suggests field sizes over a billion barrels of oil in place could be present.

'This is a watershed moment for the country and the Authority (LPRA) is excited to reach an agreement with all parties including TGS and NOCAL in promoting Liberia’s offshore acreage and attracting the needed investment in Liberia towards support for the Pro-Poor Agenda for Prosperity and Development (PAPD) under the aegis and leadership of President Dr. George Manneh Weah', commented Archie N. Donmo, Director General at LPRA.

A formal announcement on the actual licensing date in 2020 will be made at the soonest by His Excellency, Dr. Weah, based on the recommendation from the Authority (LPRA), working in concert with NOCAL and TGS.