Petro Matad, the AIM quoted Mongolian oil explorer, has announced the results of well testing operations at its Heron-1 oil discovery in the north of Block XX, eastern Mongolia, adjacent to the producing Block XIX, operated by PetroChina.

Intervals for two separate cased hole drill stem tests ('DST'") were chosen based on the petrophysical analysis of log data acquired over the 77 metres of potential oil reservoir in the Lower Tsagaantsav Formation in the Heron-1 well. The first test was performed over a three metre zone at 2,872 metres, near the base of the sands seen in the well. This zone proved to be tight with very limited inflow recorded. Oil was present in the test string when the tools were recovered to surface indicating that the zone is indeed oil-bearing and so proving an oil column height of at least 70 metres in the well. The pressure data from DST1 is now being analysed and will be used by specialist reservoir stimulation experts that the Company has retained to determine if improvements in permeability could be achieved to allow this zone to flow.

DST2 was performed over a 12 metre interval from 2,834 metres in the upper portion of the Lower Tsagaantsav Formation. The zone flowed oil and some associated gas to surface without the need for any artificial lift. This is exceptional for the Tamsag Basin where only a few of the hundreds of wells drilled have had the capability to produce oil to surface on natural flow. The peak production recorded during the test was 821 barrels of oil per day ("bopd"). For the main flow period, the well was choked back on an 0.3-inchchoke to optimise the collection of pressure data. Through this period, the well flowed at an average rate of 200 bopd with a well head flowing pressure of 250 psi. The oil recovered is very light, with an API gravity of 46 degrees making it one of the lightest oils recorded in the basin. This may be a function of Heron-1 being one of the deeper discovery wells so far drilled and tested in the area. No formation water was produced during the test. The well has now been shut in for pressure build up and once the test is complete and all samples and pressure data have been gathered the test equipment and the service rig will be demobilised and the Heron-1 well will be suspended.

Given the capacity of the well to flow naturally to surface at what is clearly a commercial flow rate, the well will not be subject to any reservoir stimulation operations at this time. The test data will now be analysed to determine the sustainable deliverability of the well on natural flow and what rate the reservoir could be expected to sustain if the well is pumped. The data will also be used to investigate what impact reservoir stimulation could be expected to have on the well's production characteristics in the future including analysis of the additional oil-bearing intervals in the well that have not yet been tested.

The Company had assigned a pre-drill resource estimated for the Heron structure of 165 million barrels of in place oil, with 25 million barrels (P50) recoverable resource, based on a recovery factor of 15%. The Heron-1 flowrate is very encouraging and could indicate that the assumed recovery factor is too conservative, however more wells will be required to prove up the total volumes in the structure.

The Company will now focus its activities on incorporating all the data it has gathered in its 2019 drilling campaign, and in particular the Heron-1 results, into a rapid reinterpretation of Block XX and will then engage with the Mongolian government to secure an Exploitation Licence in order to be able to put Heron-1 on to production in 2020, to pursue the development of the discovery and to investigate further the resource potential of the now proven continuation of the Tamsag Basin petroleum system into Block XX. 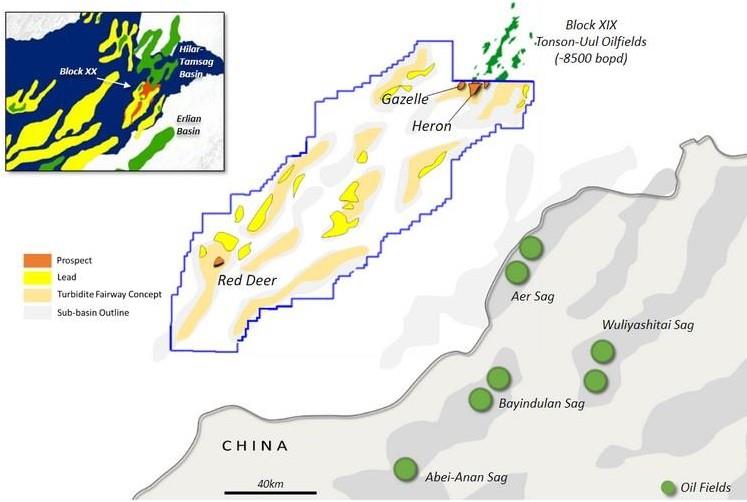 'The test results at Heron-1 are even better than we expected given that the well is deep in the basin centre. The data gathered will now be analysed and used to secure tenure of a development area in Block XX with a view to transitioning Petro Matad from explorer to producer with revenue generation.

I am delighted that the Petro Matad team has been able to achieve this result having put in so much effort. We look forward to progressing to the next phase of the Company's development.'