Predator Oil & Gas, the Jersey-based Oil and Gas Company with operations in Morocco, Trinidad and Ireland and focussed on gas as a sustainable lower carbon fuel for the Energy Transition, has announced, as previously referenced in the Operations Update released on 15 December 2021, the completion by SLR Consulting (Ireland) of a Competent Persons Report ('CPR'). The CPR comprises of an independent re-assessment and valuation of the 'Guercif MOU-4 Prospect' as evaluated by SLR in the CPR referenced in the Operations Update released on 7 December 2020 and now defined as the Tertiary Moulouya Turbidite Fan Appraisal Project following the incorporation of the positive MOU-1 drilling results. 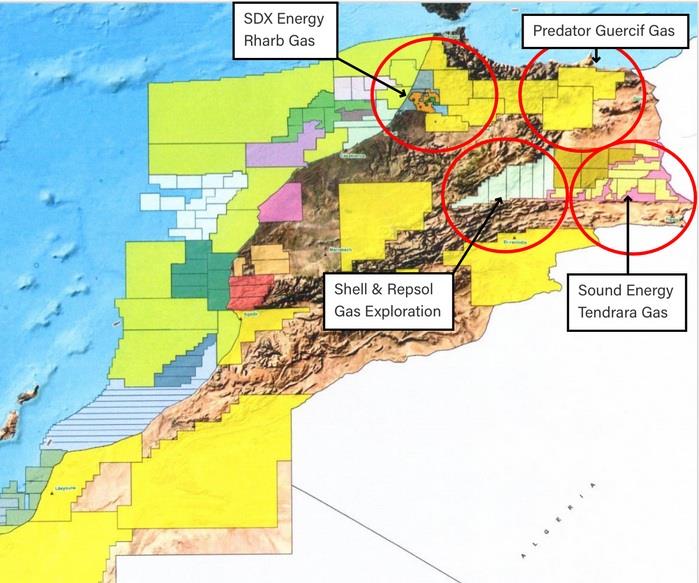 The Best Estimate assessment uses a gas initially in place ('GIIP') estimate of 595 BCF based on an area of closure following the drilling of MOU-1 of 31.7 km². MOU-1 established a common structural closure with the original MOU-4 Prospect and calibrated the pre-drill seismic amplitude anomalies over this area with the gas-bearing interval encountered in MOU-1.

The gross Best Estimate for the Appraisal Project based on a conservative 66% gas recovery over 13 years is 393 BCF (295 BCF net attributable to Predator's 75% interest). SLR indicate a High Estimate of 708 BCF net attributable to Predator's 75% interest based on a higher GIIP estimate for thicker reservoirs.

The results of the MOU-1 well have confirmed and de-risked the previously reported pre-drill CPR assessment of Prospective Resources.

As a consequence the CPR has moved the pre-drill Prospective Resources to Contingent Resources and defines the Best Estimate of 295 BCF net to the Company's 75% interest to be 'potentially recoverable from a known accumulation by the application of a development project'. The CPR concludes that 'based on the potential size of the MOU-4 structure, the project is likely to be commercially viable'.

The definition of Contingent Resources has resulted in an ENPV of US$148 million based on 25% of the 295 BCF (74 BCF) of the net resources attributable to the Company's 75% interest. The 25% chance of proceeding to development reflects the remaining production, transport, legal, contractual and environmental issues relating to a large-scale gas-to-power development. Unrisked ENPV is US$592 million. The CPR states that 'the chance of commerciality for a pilot Compressed Natural Gas ('CNG') development supplying lower volumes of gas to industrial markets is likely to be considerably higher', based on a higher reported average gas price to the Moroccan industry of US$11.40/mcf in 2021.

A CNG development is the preferred development option for the Company. Net capital costs for the Company's 75% interest required for a CNG pilot development are reported in the CPR to be 'US$12.21 million with operating costs of US$2.3/mcf'. At US$11/mcf gas sales price to industry this 'provides a commercial model for CNG'. CNG is adaptable to the dispersed nature of the Moroccan industrial gas market. It also enables accelerated monetisation of gas with minimal initial investment in drilling as the production profile is very flexible and can be tailored to mobile trucking and individual customer requirements without the need for extensive drilling to establish a substantive threshold gas profile with which to justify investment in pipeline costs to secure minimum throughput to recover fixed infrastructure investment. The continued availability of the Star Valley rig in Morocco makes scaling up of a pilot CNG development achievable.

The CPR confirms that the MOU-1 well penetrated the extreme western limit of the Tertiary MOU-4 submarine fan  Even at this extremity the CPR notes that 'petrophysical log analysis by NuTech confirms 10 metres of net gas pay within thin sands within a gross section of more than 60 metres'.

MOU-1 testing is planned for Q2 2022 following the anticipated relaxation of COVID travel restrictions in Morocco. The Company is fully funded to carry out an extended rig-less testing programme.

Pre-drill preparations for the MOU-4 step-out well 8 kms. to the east of MOU-1 on the same structure de-risked by MOU-1 is progressing as planned at a location where the maximum thickness of reservoirs sands is interpreted to be present. The CPR confirms the 'analogy of MOU-4 to the Anchois-1 gas discovery in the offshore Rharb Basin'.

MOU-1 confirmed for the first time a working hydrocarbon system in the Guercif Basin for thermogenic dry gas originating from a much deeper source interval. It defined a new gas province in Guercif and de-risked multiple gas prospects over an area of at least 200 km² to be followed up in the future. The immediate focus is on appraising and developing the MOU-4 Appraisal Project.

The Anchois area is a proven offshore extension of the Rharb Basin and with MOU-1 Guercif is now proven to be the eastern onshore extension of the Rharb Basin. Together this re-emerging gas province is a continuous geological unit extending over 250 kms. from west to east and beginning to generate substantive gas discoveries much larger than any encountered to date in the onshore Rharb Basin. The gas province is well positioned geographically to serve the domestic gas market and to access infrastructure - road, rail and gas pipelines. In addition the area is connected to Europe via the Maghreb Gas Pipeline.

The Guercif licence covers an area of 7,269 km². MOU-1 de-risked the petroleum system in Guercif by proving migration pathways for deep thermogenic gas from a much deeper source rock. In addition to the Tertiary gas, which is the Company's near-term focus, multiple deeper Jurassic oil and gas prospective leads have been identified for future evaluation and drilling. The location for one of these features, 'MOU-NE', is included in the Company's Environmental Impact Assessment for its currently scheduled drilling programme for the MOU-4 Appraisal Project. MOU-NE lies updip from an abundant micro-seepage with an oil signature identified by a Geo-Microbial Technologies micro-seepage survey in 2006 and 2007 (as referenced in the current CPR).

The success of the MOU-1 well in de-risking a working petroleum system in the Guercif licence area covering 7,269km² creates a significant challenge for the Company in terms of accelerating the evaluation of the full potential of the licence area. This will require securing the longer term financing and joint venture partnerships required to realise shareholder value at a time when the oil and gas sector is being strongly impacted by climate change concerns.  The Company's current public market capitalisation no longer reflects the value of its Guercif asset in terms of its development potential. Guercif represents one of the largest onshore licences in Morocco with gas prospectivity established by MOU-1.

The Company will consider all options to monetise its asset during 2022.

'We are pleased to report the results of the CPR confirming the continuity of the MOU-1 and MOU-4 structures which has established material Contingent Gas Resources net to the Company of 295 BCF and an unrisked ENPV of US$592million.

The realisation of Contingent Gas Resources gives the Company an additional option for shareholder monetisation. In order to create greater financial substance a reversal into an entity wanting exposure to the Guercif opportunity should not be discounted as a future option.

Management and the largest individual shareholder would be very supportive of such a move if the value proposition was sufficiently attractive for shareholders and guaranteed accelerated exploitation of the full potential of the Guercif licence area.

The ENPV versus current market capitalisation demonstrates an imbalance that does not reflect potential shareholder value.'