Morocco: Sound Energy concludes re-negotiation of the terms of its Anoual Exploration Permits in Eastern Morocco

Sound Energy, the Moroccan focused upstream gas company, has announced that it has, together with its licence partners, successfully concluded a re-negotiation of the terms of its Anoual Exploration Permits with Morocco's National Office of Hydrocarbons and Mines ('ONHYM') which aligns the work programme commitments on the Permit and the Company's continued pursuit to unlock the exploration potential of the Eastern Morocco basin, with the expected phasing of the Company's recently announced Tendrara Production Concession Phase 1 development plan.

The Permit, which became effective on 31 August 2017 and covers an area of some 8,873 sq kms has a duration of 8 years and, as with all Moroccan exploration permits, is divided into 3 phases with each phase having pre-agreed work commitments. The original work commitments under the Permit were:

The amended work programme commitments under the Permit are now as follows:

The effective date of the Permit remains the same. The Company clarifies that the commitment to acquire FTG-aerogradiometry and 600 kilometres of 2D seismic has already been fulfilled and approved as such by ONHYM. The Company holds an operated 47.5% interest in the Permit, with the remainder held by joint venture partners Schlumberger with a 27.5% share and ONHYM with a 25% share. 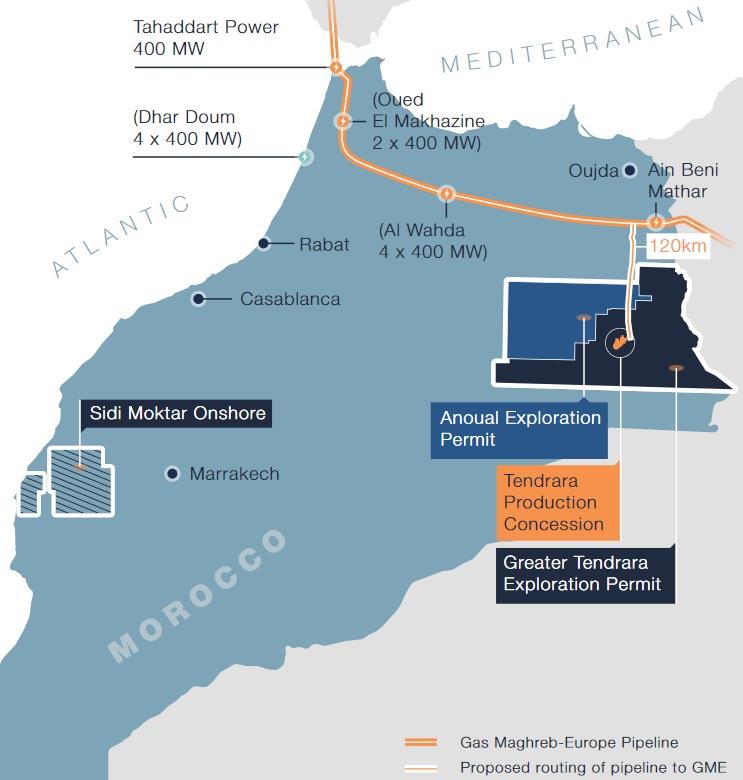 'Despite the challenges caused by the COVID-19 restrictions, I am delighted to have re-aligned our committed exploration work programme at the Anoual Exploration Permit in Eastern Morocco so it dovetails more efficiently with the proposed phasing of our Phase 1 Development Plan at the Tendrara Production Concession in a manner that underscores both our confidence in the potential of the basin as a future significant gas producing province and our ability to deploy capital judiciously across the portfolio.'