Morocco: Sound Energy in heads of terms agreement for the sale of a substantial interest in its Eastern Morocco Portfolio

Sound Energy, the Moroccan focused upstream gas company, has updated investors on the ongoing marketing process in respect of its Eastern Morocco Portfolio.

The Company announced on 22 May 2019 that, following a decision by its Board to explore monetisation options for the Company's interests in the Tendrara Production Concession, the Greater Tendrara Petroleum Agreement and the Anoual Permits (together the 'Eastern Morocco Portfolio') with a view to assessing a sale of the portfolio prior to a final investment decision, the Company had commenced the marketing of the Eastern Morocco Portfolio.

The Company has since entered into non-disclosure agreements with 23 companies and, following these, hosted some 15 management presentations which resulted in the Company receiving a number of non-binding offers for its Eastern Morocco Portfolio, delivering a range of valuations and risk / reward profiles.

Fundamentally, the Company continues to believe the Tendrara basin requires further exploration drilling to unlock fully the basin potential and to deliver enhanced value to shareholders.

As a result, the Company has now entered into a non-binding heads of terms agreement (the "HOT") with, a privately-owned, UK registered company specialising in energy asset development and investment (the "Purchaser"), which will, on completion of the transaction, result in the sale of a substantial proportion of the Company's interest in the Eastern Morocco Portfolio, whilst at the same time allowing it to retain a carried interest that provides the opportunity for Sound Energy and its shareholders to continue to benefit from significant potential upside in the Eastern Morocco Portfolio.

Under the terms of the HOT, Sound Energy has granted to the Purchaser an  exclusivity period expiring on 14 February 2020, subject to certain milestones being met,  to complete due diligence on the Eastern Morocco Portfolio and to finalise a binding sale and purchase agreement for the proposed sale by Sound Energy of 51%   (24.2% out of a total of 47.5%) of its share in the Eastern Morocco Portfolio for a total consideration of US$112.8 million, consisting of a US$54.3 million cash consideration payable in tranches and an estimated US$58.5 million carry with respect to Sound Energy's future capital expenditure requirements relating to its retained interest in the Tendrara Production Concession in order to achieve first gas production from the concession (the "Proposed Transaction").

The cash consideration will be payable in three tranches: 55% on completion of the Proposed Transaction (from which the Company will meet transaction expenses and related costs); 30% at the Final Investment Decision (when binding commitments are made to provide the development capital) of the concession; and 15% within 60 days of the delivery of first gas production from the concession. The completion of the Proposed Transaction will be subject to satisfactory completion of due diligence and Purchaser financing.

The Proposed Transaction will be subject to Sound Energy shareholder approval at a general meeting of the Company to be convened in due course.

Further announcements in relation to the progress of the Proposed Transaction will be made, as appropriate. 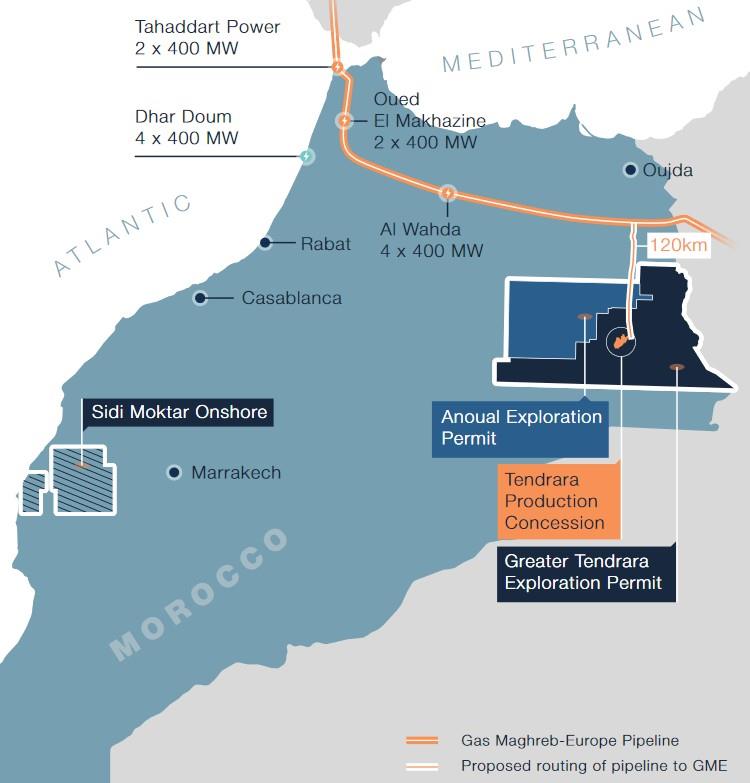 'The Proposed Transaction being progressed on an exclusive basis funds development of the Tendrara project, provides early monetisation of a substantial part of our established gas resources and retains upside for our shareholders through both future gas production and further exploration drilling.'