The Company has also provided updates on its exploration portfolio in Eastern Morocco and the initiation of a programme to structurally reduce Sound Energy operating expenses. 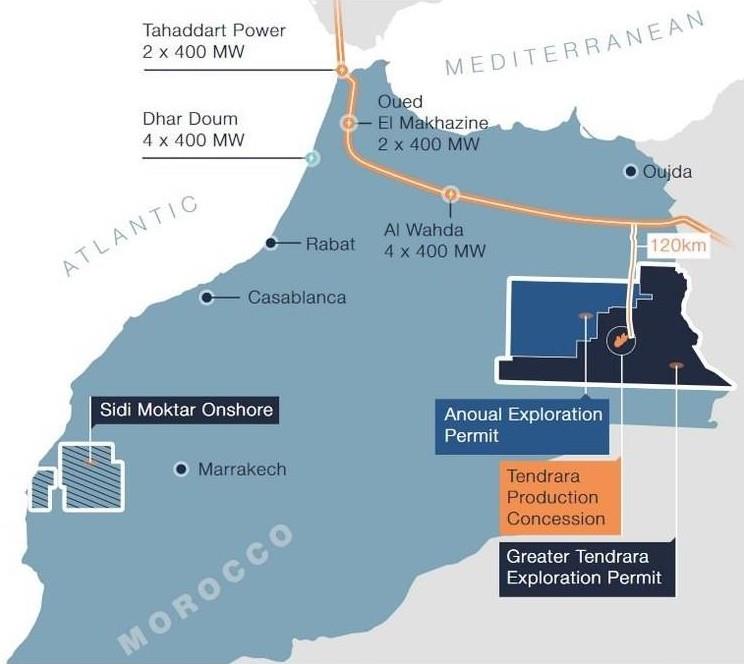 'Whilst clearly disappointed with the outcome of the recent well test at TE-10, the team and I are encouraged to have delivered gas to surface from another TAGI discovery and remain confident in the potential of our Eastern Morocco basin.  We have now completed the TAGI element of our current exploration programme and expect to update shortly on our forward looking strategy.'

As previously announced by the Company, the TE-10 exploration well was drilled to a measured depth ('MD') of 2,218 mMD, with gas shows greater than background levels observed across the gross TAGI interval, from 1,908 mMD to approx. 2,030m MD.  Both internal and external petrophysical interpretations of wireline log data, integrated with FMI (high definition formation micro-imager log), and side wall core analyses, estimated net pay of up to 15.4m in a succession of thinly bedded gas bearing intervals distributed throughout the 110m gross TAGI reservoir interval.  The presence of moveable hydrocarbons was further supported by the successful recovery of a gas sample from 1,937 mMD, with no evidence of water, using a modular formation dynamics tester (MDT).

A test programme was designed to assess commerciality, which included perforation of four zones within the gross TAGI interval and stimulation of the uppermost primary zone.  The Company announced securing gas to surface pre-stimulation from this primary zone on 8 May 2019.

A mechanical stimulation was carried out over the uppermost primary zone (1,932 to 1938 mMD) by an experienced crew of Schlumberger engineers, deploying 'state of the art' Schlumberger Hi-Way technology, the first use of this technique in Morocco.  Wireline data acquired during the operations indicated that the stimulation was successful and that the formation was likely fractured over an interval between 1,924 mMD and 1,946 mMD.  After the initial clean up this zone was flowed and recovered a mixture of gas and liquid, largely comprising the fluid used in the stimulation.  Two nitrogen lift operations were subsequently performed in an attempt to increase the gas flow rate, followed by nitrogen injection into the fracture network.  Despite the nitrogen lifts and injection the Company reports that the gas flow rates achieved were below the 1.5 mmscf/d to 2.0 mmscf/d commercial threshold required for development previously advised by the Company.  In total approx. 64,500 scf of gas and approx. 2,300 bbls of liquid were recovered over an 11 day period.  The hydrocarbon gas was sampled and flared at the wellsite.

The secondary lower three zones did not flow gas unstimulated, and a sample of liquid subsequently interpreted as formation water, was recovered from the third zone (1,965 to 1,977 mMD). The subsequent analysis of this water supported the petrophysical interpretation of high gas saturations in the uppermost primary zone.

The Company now intends to deploy a downhole gauge to monitor the pressure in the well and will demobilize the test equipment and crew from the TE-10 well site.

Sound Energy's portfolio in Eastern Morocco comprises the Tendrara Production Concession and approx. 24,000 sq kms of exploration acreage. The Company is planning to take the final investment decision (FID) on the TE-5 Horst discovery around the end of 2019. In the surrounding acreage, the Company has been following a strategy of high risk and high reward exploration, targeting high potential prospects in both the TAGI and Palaeozoic plays. The objectives of this programme are to significantly build on the Company's established resource position and to unlock the full potential of the basin.

A significant geophysical acquisition programme beginning in 2017 has been followed by the 2018-19 three well drilling programme. Wells TE-9 and TE-10 both targeted TAGI reservoirs, with the TE-11 well planned to target a Palaeozoic prospect, all in large-scale traps. Whilst the TE-9 and TE-10 wells have established the regional presence of gas charge and effective top seals, the TAGI reservoir quality, as predicted, remains the key risk to this play.

The Company also announces that it has now finalised the interpretation of the recently acquired seismic data and has identified multiple, near-term drilling opportunities in the TAGI, proximal to the Tendrara Production Concession.  These include exploration and appraisal targets at earlier wells SBK, TE-4 and TE-2 and at new prospects M5 and B1 which the Company estimates to have a collective exploration potential exceeding a mid-case of 3 Tcf of gross unrisked gas originally in place, supporting the continued prospectivity of the TAGI play.  Additionally, continued interpretation has confirmed the presence of material Palaeozoic prospectivity in the northeast area of the Greater Tendrara licence. Taken together, the Company believes that considerable exploration potential remains within this acreage. The Company expects to be able to provide an update on plans for the third well in the exploration programme, TE-11, shortly.

The Company had unaudited cash balances of more than US$14 million as at 14 May 2019.

With two of the exploration wells in the current three well exploration programme now concluded,  the Company has initiated a structural cost reduction programme aimed at materially reducing the Company's ongoing operating expenditure, including reductions in staff numbers and staff costs.  Progress is well advanced with actions recently implemented expected to result in an annualised reduction in general and administrative expenses of over 50%.