Namibia/Italy: Global Petroleum provides update on its operations in Namibia and Italy

AIM-listed Global Petroleum has provided an update on its operations in Namibia and Italy.

On 25 April 2022 the Company announced that that the Namibian authorities had granted a one year extension to the Initial Exploration Period of PEL 94 until September 2023, also making the observation that the Venus and Graff discoveries heralded a major new petroleum province in Namibia.

Global also notes the completion by Shell of the La Rona-1 well, which was drilled immediately following the Graff-1 discovery well and close to it. The Shell wells are located - as is Venus-1X - in the Orange Basin, southern Namibia - see Figure 1.

Although no formal announcement has been made by Shell, reports suggest that Graff and La Rona have discovered significant volumes of oil and gas in two reservoirs. Shell has stated that it will drill more appraisal and exploration wells in order to prove commerciality and to design the optimal development plan.

Unsurprisingly, interest in Namibian offshore exploration has risen unprecedentedly - a development which has become evident to Global in the course of its farmout of PEL 94, and also to industry observers generally.

As previously indicated, a consequence of the TotalEnergies and Shell discoveries is that companies, particularly potential new entrants, are taking significant time to evaluate the geology and petroleum systems offshore Namibia.

Whilst focus is understandably intense in the Orange Basin - especially in the region of the discoveries - Global's view is that oil-prone opportunities there are both limited and likely to be very expensive.

The Company believes that the Walvis Basin, where PEL 94 is situated, also has the potential to be extremely successful, but has the advantage of much shallower water depths generally than the discoveries in the south.

Global believes that there is commonality of both source and reservoir between the two discoveries in the Orange Basin and PEL 94. A presentation given by Global at a recent industry workshop in Namibia, regarding mapping of the source rock and migration of oil and gas from it, was well received and has generated additional interest in the PEL 94 data room process. 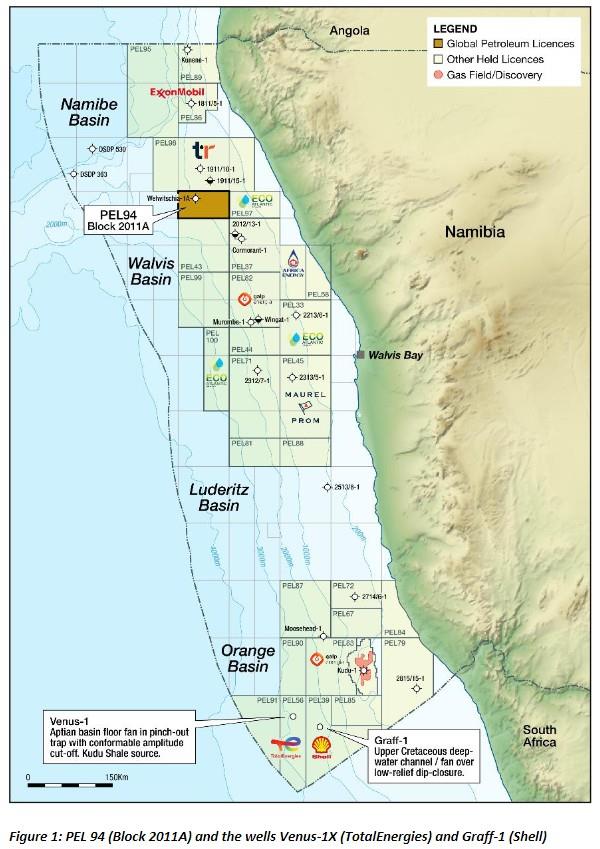 As previously announced by the Company, the 'Plan for Sustainable Energy Transition of Appropriate Areas' ("Plan") came into effect in Italy in February 2022.

Global and its advisers have subsequently undertaken a detailed study of the Plan, with particular reference to the Company's four exploration permit applications in the Southern Adriatic ("Applications").

A key structural component of the Plan is the provision that in future only exploration for gas (as opposed to oil) will be permitted in Italy, both onshore and offshore. With specific regard to the Applications, the Plan also provides that certain sections of the application areas as previously constituted are deemed to be excluded, a process referred to by the relevant authorities as "re-perimeterisation" - see Figure 2.

Notwithstanding the Company's reservations as to the practicality of gas-only exploration - a reservation which Global believes is widely shared within the Energy Industry and beyond - the Company provided the Italian authorities technical evidence of the gas prospectivity within the reduced application areas, also thereby accepting the re-perimeterisation of those areas.

Having considered the communications from the Company as above, the Italian Ministry of Ecological Transition has now informed Global that the Company's exploration objectives in the Applications are in compliance with the provisions of the Plan, and that there is no impediment to the continuation of the process (towards eventual award of the exploration permits).

The Company has decided to continue the process accordingly, which it is advised will include, amongst other things, re-qualification in accordance with technical and financial criteria.

In so deciding, the Company notes that it had previously satisfied all of the then required legal and administrative procedures in connection with the Applications and subsequently won all legal cases brought by numerous parties in connection with the Applications, both at first instance and, latterly, in the European Court (see Global RNS of 14 January 2022) - the Company was also awarded costs in all cases.

However, the Company will continue to monitor both the evolving requirements of the application process and the wider legal and political environment in Italy. If the Company is both ultimately successful, and then decides to accept award of exploration permits, it currently expects that it would seek a partner, prior to any such award. 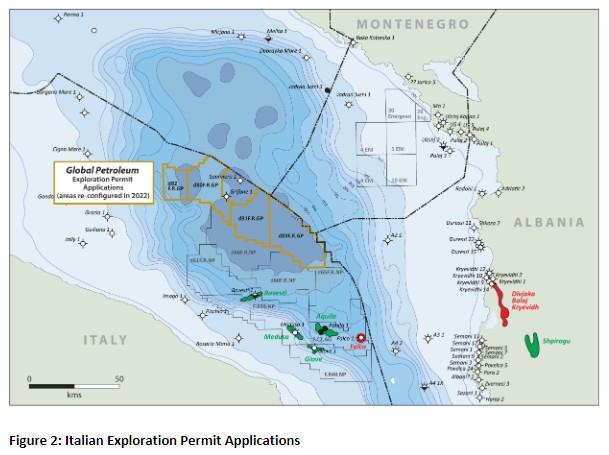 'Regarding Italy, our current thinking is that it is worth pressing on with the process, notwithstanding our reservations. Apart from the great amount time and effort which the team at Global have put into the applications over the years, plus the fact that we have won all of the legal cases brought against us, from a wider strategic perspective we note that since the substance of the Hydrocarbon Plan was finalised by the Italian Government in late 2021, the energy supply situation in Italy and in Europe generally has altered dramatically.

'In Namibia, although companies will naturally be looking first at the Orange Basin, we are encouraged by the quality of the parties who have shown interest in our farmout of PEL 94. Our analysis is that there are very few attractive, available blocks in the Orange Basin and there is great competition for them. We think that Global holds one of the most prospective blocks in the Namibian offshore for the reasons we set out in this Announcement, and we firmly believe that our patience will pay off.'