Sintana Energy has announced that the Ministry of Mines and Energy in Namibia has approved an extension to the First Renewal Exploration Period for the Petroleum Exploration License 83 ('PEL 83') providing for an increase to the related work program which will support the drilling of an exploration well currently expected in 2023. Sintana, through its indirect investment in Custos Energy, maintains a 4.9% carried interest in the blocks 2813A and 2814B which are operated through PEL 83. The License is operated by Galp, with an 80% interest. Sintana also owns indirect interests in the adjacent blocks operated through PEL 90 and PEL 87. 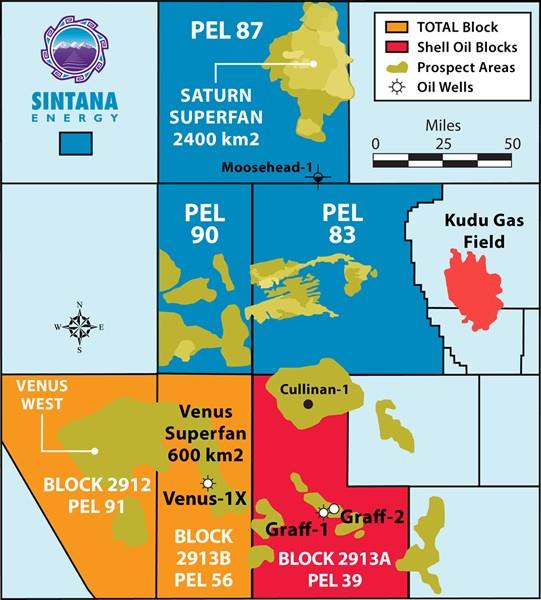 PEL 83 represents one of the most exciting exploration opportunities in the Orange Basin, sitting directly above Block 2913A where Shell made its Graff-1 light oil discovery, and directly to the west of the Kudu Gas Field currently being developed by BW Energy. PEL 83 is also contiguous to Block 2913B where Total made its Venus-1 discovery. Both Shell and Total have initiated further activity on their respective blocks.

'Custos acquired its interest in PEL 83 in 2016. It is fantastic to see the activity and interest catch up around us. We expect significant discoveries will continue to be made, on our blocks and on those around us,' said Knowledge Katti, founder of Custos Energy and a Director of Sintana.

'Our entry into Namibia was timely. We believe that continuing investment in the Orange Basin, including the drilling of an exploration well on PEL 83, will further substantiate Namibia's emergence as the world's next great hydrocarbon province,' said Robert Bose, President & Director of Sintana. 'We look forward to further activity and announcements in the near-term,' he added.