Further to the announcement dated 21 October 2019, PetroNor E&P has now finalised and entered into the separate investment and shareholders agreement with the OML 113 operator, Yinka Folawiyo Petroleum ('YFP'). The purpose of the YFP Agreement is to form a partnership and a jointly owned special purpose vehicle ('SPV') named Aje Petroleum to focus on the revitalisation and further development of OML 113 and the Aje oil and gas field, offshore Nigeria. 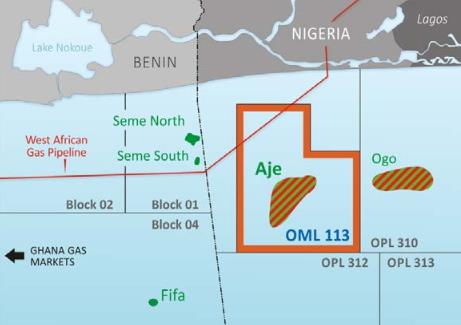 The ownership of Aje Petroleum is to be shared between YFP and PetroNor on the basis of a 55% and 45% shareholding respectively. Governance is established via a board consisting of five directors with two nominated by each of YFP and PetroNor and one independent director. One of YFP’s nominated directors will be the Chairman.

YFP, as the operator of OML 113, will engage Aje Petroleum as a technical service company. A joint project management team will be established by the Aje Board and be led by a member nominated by PetroNor (the 'Technical Manager'). An early deliverable will be the agreement of a workplan and budget in relation to the operations of OML 113. The completion of the YFP Agreement is subject to authorisation of the Nigerian Department of Petroleum Resources and consent of the Minister of Petroleum Resources.

“This agreement is a key step in establishing a means to create partner alignment around our proposed concepts for the future development of the Aje Field. It builds on PetroNor’s successful business development track record of gaining access to opportunities by presenting commercial and technical solutions to asset owners in order to enhance value. In this case, it has led to the creation of a special purpose vehicle with majority local content that is focused on realising the value of OML 113. Following government approvals, the Company will advance plans for increasing liquids production, and developing the discovered gas resources.'

'The fundamentals of the Aje Field are very encouraging. As part of our due diligence for the transaction our technical team has looked closely at various development plans to fully monitize the Aje Field. We are looking forward to working closely with our partners on the licence to review and approve these plans.'

Eyas Alhomouz, Chairman of Petronor and incoming board member of Aje Petroleum, said:

'We are very happy working with YFP and their advisor Redcliff Energy Advisors in the joint effort to finalise this agreement. We look forward to aligning with rest of the licence partners and the government of Nigeria for the future development of the Aje Field.'