San Leon Energy, the independent oil and gas production, development and exploration company focused on Nigeria, has announced that it is investing US$15 million in Energy Link Infrastructure (Malta) Limited ('ELI'), the company which owns the Alternative Crude Oil Evacuation System ('ACOES') project. As previously announced, the ACOES is being constructed to provide a dedicated oil export route from the OML 18 asset, comprising a new pipeline from OML 18 and a floating storage and offloading vessel ('FSO'). Once commissioned, the system is expected by Eroton to reduce the downtime and allocated pipeline losses currently associated with the Nembe Creek Trunk Line ('NCTL'), to below 10%. In addition, it is anticipated that the FSO project will improve overall well uptime. 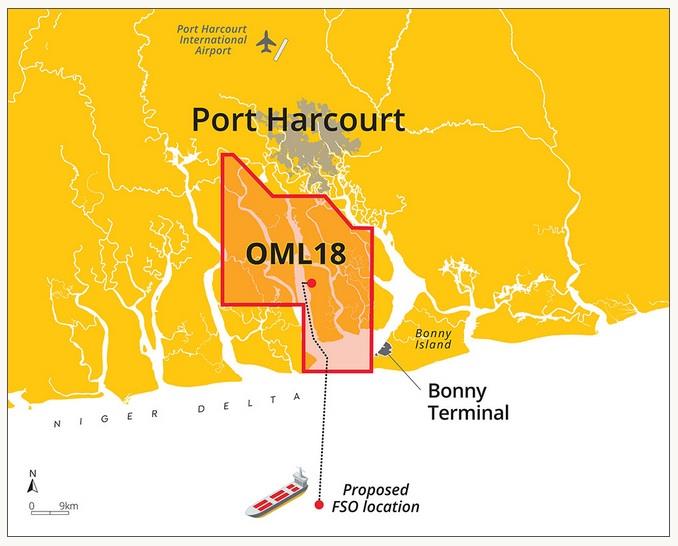 The investment comprises a 10% equity interest in ELI together with a US$15 million shareholder loan at a coupon of 14% per annum over 4 years, and repayable quarterly following a one-year moratorium from the date of investment. Funds will be provided to ELI in two tranches with the first US$10 million tranche being made by San Leon this week.  The second tranche of US$5 million is expected to be made in Q4 2020 following receipt from Midwestern Leon Petroleum Limited of the next repayment of Loan Notes that is due then.

The Board believes that the ACOES will have a significant effect on the operation of OML 18, primarily through the reduction of downtime and losses associated with the existing export route.  ELI, through its Nigerian subsidiary, will earn fees for transporting and storing crude oil from OML 18 and potential third parties. As a shareholder in ELI, San Leon stands to benefit from what the Board considers can be a very profitable operation in the medium to long term.

Information about ELI and ACOES

ELI is incorporated in Malta but operates in Nigeria through its subsidiary, Energy Link Infrastructure Limited, owning both the new pipeline as well as the floating storage and offloading vessel, which together comprise the ACOES.  Pending commencement of operations, which is expected in the coming quarters, the company is yet to report meaningful financial information and the last audited accounts for the period from 6 September 2017 to 31 December 2018 state that the company made a loss of €13,668 and reported total assets of €8,699.

San Leon does not consider these figures to be representative of the scale of the opportunity that ELI has pending development of the ACOES, as those figures are prior to commissioning of the ACOES.  However, as described above, the entire investment of US$15 million is repayable, with interest, as a shareholder loan. In addition, San Leon will retain a 10% equity interest in ELI going forward.

In its due diligence, the Board has been encouraged by the quality and commitment of ELI's existing shareholders which include, through a minority indirect stake, Midwestern Oil & Gas Company Limited, one of San Leon's largest shareholders.

San Leon will also receive one seat on the board of ELI pursuant to its investment.

The pipeline component of the ACOES is expected by ELI to have a throughput capability of around 100,000 barrels of oil per day, while the FSO has a storage capacity of 2 million barrels of oil.  Once commissioned, ELI's charges are expected to be comparable to current NCTL handling fees.

'We are delighted to make this investment, which is in line with our strategy of investing in assets with near-term cash flow, where the initial investment is considered to be of limited risk and where there is material upside. The ACOES is expected to generate regular cash flow once commissioned in the coming quarters, whilst also providing the significant benefits to downtime and losses reduction for OML 18 which we have previously described.

'The structure of the transaction, which combines an equity investment in the project together with a loan, gives us the opportunity to generate a meaningful return from loan repayments in the coming years as well as looking forward to a longer-term dividend return from our shareholding in ELI. Following the recent maiden special dividend paid to San Leon shareholders, the Company anticipates that equity income from the ELI shareholding will contribute to further future dividends to San Leon shareholders.'