The AErfugl partners have decided to proceed with Phase 2 of the AErfugl project in the Norwegian Sea, three years ahead of the original plan. The AErfugl field, which produces via Skarv FPSO, is one of the most profitable development projects on the Norwegian shelf with a break-even price of around USD 15 per barrel (converted from gas). 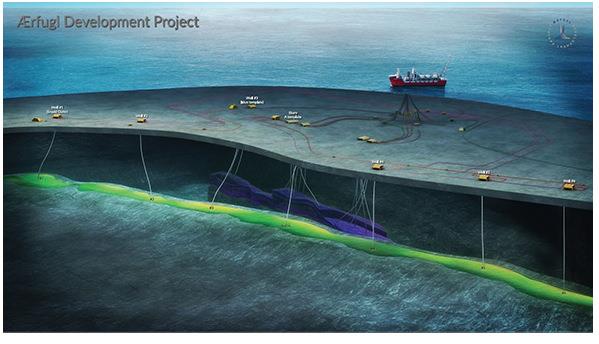 Operator Aker BP and partners Equinor, Wintershall DEA and PGNiG approved the final investment decision (DG3) for Ærfugl Phase 2 in early November. The goal is to start production from the first Phase 2 well as early as in first half of 2020. This means that production start-up for phase 2 will come before the start-up of Ærfugl phase 1!

'Acceleration of Ærfugl Phase 2 means earlier production and increased value creation from the field. This is good news for the Ærfugl joint venture, the supplier industry and the Norwegian society in the form of increased revenues,' says Kjetel Digre, SVP Operations & Asset Development in Aker BP.

The Ærfugl development is a major subsea project in two phases. Both phases are tied into the existing production vessel (FPSO) on the Skarv field, which is located approx. 210 km west of Sandnessjøen.

The Plan for Development and Operation (PDO) for both phases of the Ærfugl development was submitted to the Ministry of Petroleum and Energy in December 2017.

Phase 1, which develops the southern part of the Ærfugl field, consists of three new wells. Phase 2 consists of an additional three wells in the northern part of the field. The original plan for start-up of Phase 2 was 2023, due to capacity restrictions for processing gas on the Skarv FPSO.

'In parallel with development of Ærfugl Phase 1, work has been proceeding to increase gas processing capacity on Skarv. Modification of the plant will contribute to an increased capacity by more than 15 per cent,' says VP Operations Skarv, Ine Dolve.

'We have as well optimized the phase 2 scope and will use existing infrastructure on Skarv for the first “phase 2 well”. Overall, this means that we are now ready to proceed with developing Phase 2,' she says and adds that production from Ærfugl will help extend the lifetime of Skarv FPSO.

Great deliveries from the Alliances

Reorganizing the value chain through strategic partnerships and alliances is an important part of Aker BP’s strategy. The alliances in subsea installation, modifications and drilling&wells have contributed to the Ærfugl project.

'The Subsea alliance between Aker BP, Subsea 7 and Aker Solutions has demonstrated substantial improvements and increased value creation over several years. Now we see excellent deliveries from the alliances for the Ærfugl development. This fall, the Phase 1 production system, including three large subsea structures, was installed. The work has been done according to plan, without serious incidents. We are well-positioned to start production for phase 1 in the fourth quarter of 2020,' says Bård Atle Hovd, project director for Skarv.

'Being able to accelerate the development and production start-up of phase 2 is another manifestation of how these partnerships enable us to increase the value creation and to deliver in line with our ambitious improvement agenda,' Hovd adds.

The Ærfugl project is as well characterized by development of new technology, in line with Aker BP’s ambition to be a technology leader in the industry. The vertical valve trees and electrically heated pipelines used for the Ærfugl development are the first of their kind in the world.

The Ærfugl reservoir is mainly a gas reservoir that extends over 60 km and is 2-3 km wide. The project holds a total of around 300 million barrels of oil equivalent.

Total investment costs for the Ærfugl project are around NOK 8 billion.

The total ‘life of field’ project has a break-even-price of around USD 15 per barrel (converted from gas). This makes the field development one of the most profitable being implemented on the Norwegian shelf.

The Ærfugl project has brought significant local ripple effects, and the Phase 2 project will bring additional opportunities for assignments for local suppliers in the Helgeland region.