Equinor and its licence partners Petoro and Wellesley Petroleum have found oil and gas in the Swisher prospect in PL 248 C. Recoverable resources are estimated to be in the range of 2-6 million standard cubic metres of oil equivalent, corresponding to 13-38 million barrels of oil equivalent. 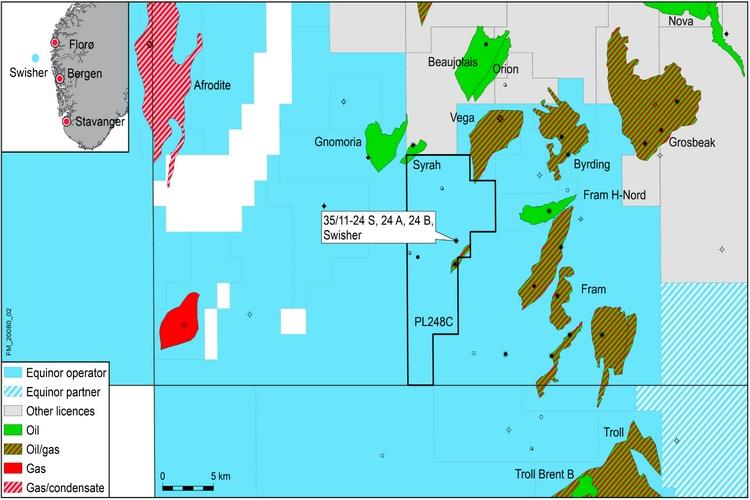 'We are working continuously on keeping an exploration portfolio that forms the basis for high value creation and in addition can be produced with a low carbon footprint. This discovery contributes to reaching this goal,' says Nick Ashton, Equinor’s senior vice president for exploration in Norway.

The discovery demonstrates the importance of continuous learning. Based on investment in new data and exploration wells that Equinor drilled last year, we have developed new understanding of the underground in one of the most mature and developed areas on the Norwegian continental shelf (NCS).

'This strongly indicates that it is still possible to prove new and profitable resources that can utilise existing infrastructure on the NCS,' says Ashton.

The purpose of the wells was to prove petroleum in the Upper Jurassic rocks of the Heather formation.

The wells were not formation-tested, however extensive data acquisition and sampling were carried out. All wells were concluded in the Heather formation from the Late Jurassic epoch at a depth of 3000-3600 metres. Water depth in the area is 356 metres. The wells have been permanently plugged and abandoned.

The licensees will evaluate the discovery for a potential tie-in to existing infrastructure in the area.

The wells were drilled by the West Hercules drilling rig, which will proceed to drill wildcat well 6407/1-8 S in the Apollonia prospect in production licence PL 263 D in the Norwegian Sea.