The Norwegian Minister of Petroleum and Energy, Kjell-Børge Freiberg, has officially opened the power-from-shore solution which will provide the Johan Sverdrup field in the North Sea with electricity for more than 50 years. Power from shore makes Johan Sverdrup one of the most carbon-efficient fields worldwide.

The giant development in the North Sea has been through the busiest installation campaign ever for a field in the North Sea. Today Johan Sverdrup reached another milestone, when power from shore was officially switched on about a year before production start-up. With electric power supplied from shore Johan Sverdrup operations can be run without the use of fossil fuels, which makes it one of the most carbon-efficient fields worldwide.

The Minister of Petroleum and Energy, Kjell-Børge Freiberg, had the honours of switching off the temporary generators which had supplied the field with electricity during the first months of the installation campaign offshore. And after the four generators had quietened down, the milestone was celebrated in the traditional offshore style with coffee and cake.

'This is an important day for Equinor and the Johan Sverdrup partners, so it is a great honour to get help from none other than the Minister with this final task to fully operationalise the power-from-shore solution,' says Jez Averty, senior vice president for operations in the south of the North Sea.

'With estimated resources of up to 3,2 billion barrels, and a production horizon of more than 50 years, it is key that Johan Sverdrup production is as effective as possible with the lowest possible emissions. Low carbon production is a key element of the company’s strategy and fully aligned with our roadmaps for climate and for the Norwegian continental shelf,' says Averty. 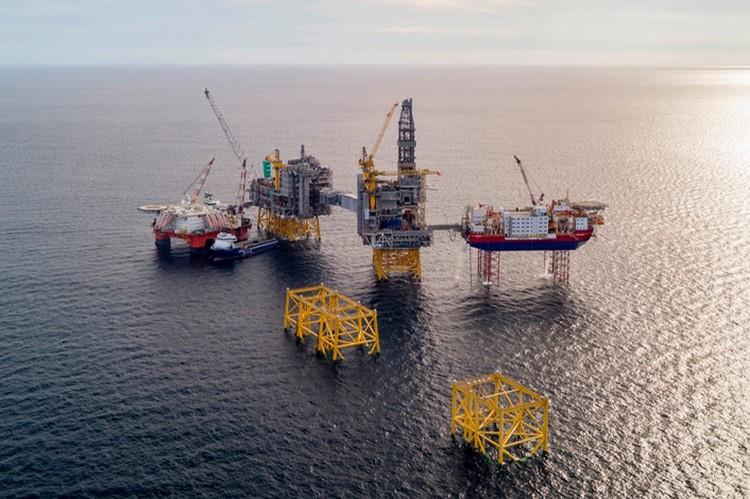 Johan Sverdrup full-field production is estimated to reach 660,000 barrels of oil per day at plateau, with a break-even of less than 20 dollars per barrel, and with CO2 emissions of only 0.67 kg per barrel. Power from shore to Johan Sverdrup will help reduce emissions by an estimated 460,000 tonnes of CO2 per year, equivalent to the emissions of 230,000 private cars each year.

Power from shore about a year before production start-up

Working closely with partners and suppliers, Equinor has taken initiatives to enable the supply of power from shore already in the commissioning phase offshore. With several energy intensive operations planned prior to production start-up – including the tieback of the eight predrilled production wells – the early supply of electricity from shore helps further reduce the carbon footprint of the project.

The Johan Sverdrup partnership has also, in collaboration with the supplier Master Marine, taken steps to ensure that the temporary accommodation rig Haven – where most of the offshore workers currently live – is also supplied with power from shore during the remainder of the project finalization stage.

'Another important benefit of power from shore is that the working environment for the almost 900 workers offshore also improves significantly. Noise offshore is significantly reduced as are local emissions, so it is a win-win all around,' says Bokn.

Seamless collaboration between onshore and offshore

In phase 1 of the Johan Sverdrup development the power-from-shore solution has a capacity of 100 MW, based on a production capacity of up to 440,000 barrels per day.

Several suppliers across several countries, both onshore and offshore, have been involved in developing and delivering the chosen solution for power from shore to Johan Sverdrup phase 1.

'While this is primarily known technology, the size of Johan Sverdrup increases the complexity of this. Seamless collaboration across the project has been key to the success of Johan Sverdrup so far – also as regards power from shore,' says Bokn.

ABB delivered the HVDC equipment for the two converter stations, onshore at Haugsneset close to Kårstø and offshore at the Johan Sverdrup field centre. First, at Haugsneset, the electric current is converted from alternating current (AC) to direct current (DC), enabling the transmission of electricity for 200 km offshore, while minimizing loss. Then, offshore, the electric current is converted back to the alternating current needed to run the field centre equipment.