Gassco has presented a new report regarding the transport of gas from the southern Barents Sea. The report shows that it could be socio-economically profitable to increase the transport capacity for gas, thereby further increasing value creation in the Barents Sea.

Value creation now and in the future

The report, 'Assessment of gas transport alternatives in the southern Barents Sea', was presented to Minister of Petroleum and Energy Sylvi Listhaug on Monday.

The Norwegian Petroleum Directorate (NPD) contributed in the preparation of the report. The objective was to prepare a broad and up-to-date factual basis in order to assess the opportunities for greater value creation associated with increased transport capacity for gas from the southern Barents Sea. 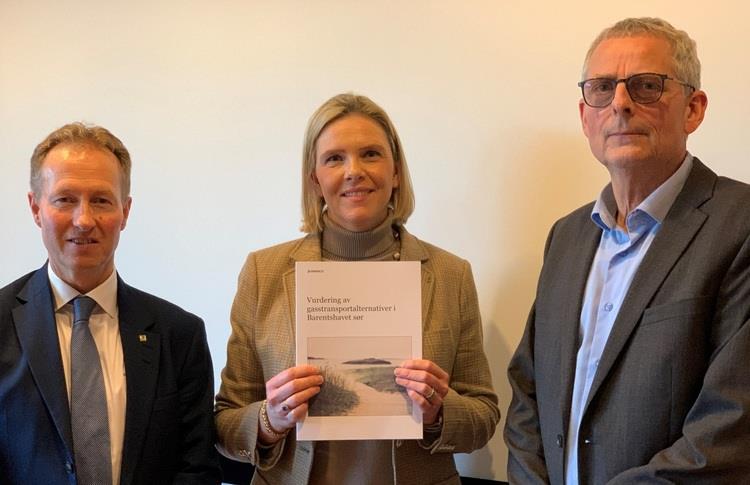 The study's two most important observations are:

Increased gas export capacity will facilitate greater value creation from fields and discoveries where resources have already been proven.

The report provides a broad factual basis and proposes joint solutions that could contribute toward further developing natural resources in the Barents Sea region. Gas export from the Barents Sea currently only takes place via the Snøhvit LNG plant on Melkøya.

Current capacity at the Melkøya LNG plant will be fully utilised through 2050 based on volumes from fields in operation and from discoveries under development.

The NPD assisted Gassco in the assessments of the resource base for fields and discoveries, and developed separate scenarios for undiscovered resources. These show that there may be a need for new transport capacity before 2050.

In contrast to previous studies, the analyses in the report show that multiple gas transport alternatives could also be profitable – based solely on proven resources. If undiscovered resources are included, even larger solutions could also be profitable. The report also shows that simpler solutions for gas transport and technology development will help reduce development and operating costs.

'An early capacity increase will facilitate more rapid development of proven gas resources, and at the same time lay the groundwork for more optimal production of oil with associated gas,' says Kjell Agnar Dragvik, NPD Director of Analyses and Framework.

Dragvik specifies that continued coordination between players is crucial in order to find cost-effective solutions for both field developments and transport solutions. This could also reduce required investments for gas and contribute to further value creation in the Barents Sea. Low costs and available transport capacity will stimulate the companies to explore for, prove and develop the area's gas resources.

Frode Leversund, President and CEO of Gassco, also points to the importance of cooperation:

'The inherent value in developing the gas resources could be substantial from a socio-economic perspective. Developing new gas infrastructure in the Barents Sea will require cooperation across production licences, which is why it is important to continue the extensive cooperation between players in the Barents Sea. The analyses in the report provide a thorough and up-to-date factual basis for further work in the region,' says Frode Leversund, President and CEO of Gassco.

The NPD's job is to contribute toward realising the greatest possible values for Norwegian society from the oil and gas industry through efficient and prudent resource management. Among other things, this involves assisting Gassco in developing good, long-term solutions for gas infrastructure.

Read the report: 'Assessment of gas transport alternatives in the southern Barents Sea' (in Norwegian)