The plan for development and operation (PDO) of the second phase of the Johan Sverdrup field development was formally approved by Norwegian authorities on 15 May. The same day sees the construction start of the field’s second processing platform at Aibel’s yard in Haugesund.

'This is a big day for Equinor and the other Johan Sverdrup partners comprising Lundin Norway, Petoro, Aker BP and Total. Johan Sverdrup is a world-class field that will provide value to its owners and society for 50 years ahead with record-low emissions. This truly marks the beginning of the second development phase,' says Anders Opedal, executive vice president for Technology, Projects and Drilling in Equinor. 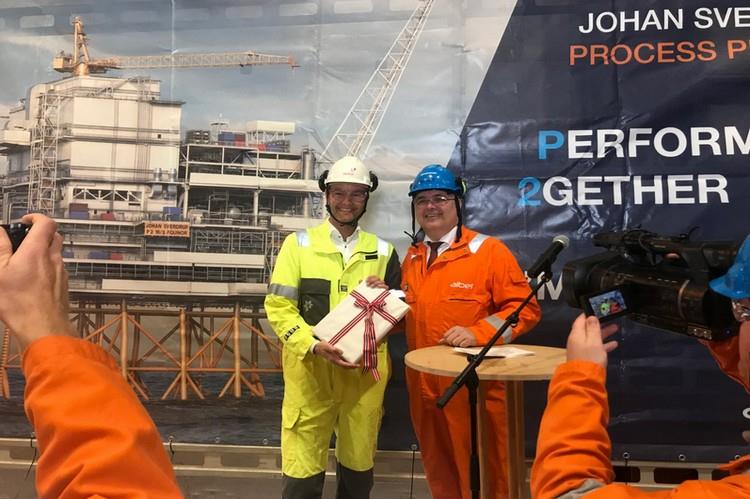 The project received broad support in the Storting (Norway’s parliament) on Monday 29 April, and today the partnership received the formal approval by the Norwegian Ministry of Petroleum and Energy (MPE).

Johan Sverdrup is the biggest field development on the Norwegian continental shelf since the 1980s. Phase two of the development, with planned start-up in Q4 2022, will increase field production from 440,000 barrels of oil per day to 660,000 barrels per day.

The second development phase has a capital expenditure of NOK 41 billion. In addition to construction of a new processing platform (P2), the development will also include modifications of the riser platform, five subsea systems, and preparations for power supply from shore to the Utsira High in 2022.

The first phase of the Johan Sverdrup development is approaching 90 % finished and production is expected to start in November this year.

Only a year after the drilling platform was completed and sailed away from Haugesund, the construction of another topside is kicked off at the Aibel yard in Haugesund.

'Johan Sverdrup has played an important role to suppliers and local communities in Norway, including Aibel and Haugesund. With the construction of the second processing platform kicked off here at Aibel’s yard on Risøy, the Johan Sverdrup project will once more become a landmark in Haugesund, which is great,' says Trond Bokn, senior vice president for the Johan Sverdrup development in Equinor.

In the first phase of the Johan Sverdrup development more than 70% of the contracts were awarded to suppliers in Norway. Despite continued strong international competition, the Norwegian share will probably be even higher in the second development phase.

The contract awarded to Aibel for construction of the second processing platform for Johan Sverdrup will help employ up to 1500 people in Haugesund during the construction phase. The Agenda Kaupang analysis agency estimates that the Johan Sverdrup field development may contribute to more than 150,000 man-years in Norway in the period 2015-2025.

'Close and good cooperation with our suppliers has been key to the improvements we have seen in the development so far. Bringing considerable experience and expertise into the second construction phase – which we are currently doing on the processing platform – gives us a sound basis for delivering also the next phase safely, with quality and at cost,' says Bokn.

The Johan Sverdrup field is powered from shore, placing it among the oil and gas fields with the lowest CO2 emissions in the world. In the second phase the field will also supply shore power to other fields on the Utsira High, including the Edvard Grieg, Gina Krog and Ivar Aasen fields. Emission reductions from Johan Sverdrup alone are estimated at more than 620,000 tonnes of CO2 on average per year, corresponding to annual emissions from 310,000 private cars.