Acquisition has begun on PGS’s latest ultra-high-density seismic survey in the Barents Sea. The survey extends Hammerfest Basin coverage further west and north into the southern Loppa High. The first data will be available Q4 2020.

The acquisition geometry builds on the innovative configuration previously applied on the PGS18004NBS survey, applying a wide-tow source configuration in combination with a tailored ultra-high-density GeoStreamer setup.

This season, PGS promises to obtain even more near offsets by extending the survey geometry used on the 2018 acquisition to push the towing limits achievable from a single vessel.

This technical set-up, which includes wide-source spread, high-density streamers, and long tails for FWI, has been tailored for the precise imaging of extremely shallow targets without compromising illumination of targets at deeper levels.

'Efficiency and accuracy are required for successful exploration in the Barents Sea. The advanced design and technology offered by the Ramform Tethys will deliver both, and result in a superior dataset for this challenging and prospective area,' says Gunhild Myhr, VP New Ventures Europe at PGS. 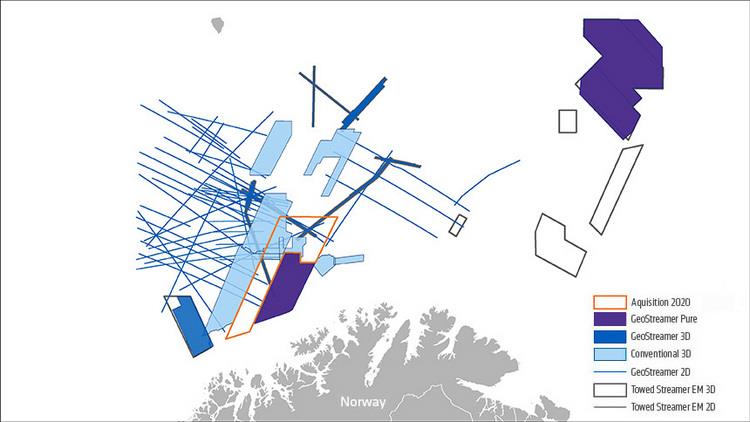 Acquisition has begun on PGS' 2020 Hammerfest Basin Extension project. PGS20001NBS, marked with an orange outline, will cover parts of the southern Loppa High and a portion of the Hammerfest Basin west of PGS18M04NBS

The survey area includes open acreage included in the APA2020 and held acreage.

Through thorough planning and modeling, acquisition and imaging of this survey have been tailored to address known exploration challenges in the Barents Sea.