A Rystad Energy cost analysis of the Norwegian pipeline operator Gassco’s proposed options to export the country’s Arctic natural gas resources, shows that the expansion of Norway’s pipeline infrastructure is a more viable solution compared to boosting the capacity of the existing Hammerfest liquefied natural gas (LNG) plant. However, at least 40 billion cubic meters (Bcm) of additional resources from new discoveries would be needed in order to justify such an initiative.

At present, the Hammerfest LNG terminal only has 7.4 Bcm per annum of LNG export capacity, and this limit is expected to be reached in 2026 as gas production in the region will exceed export capacity. The terminal was built to accommodate the gas discoveries of the 1980s, but since then new discoveries have added up. Rystad Energy estimates the remaining discovered natural gas resources in the Barents Sea at around 90 Bcm.

If Norway’s gas resources in the Barents are to be further developed and exploited, there are two main options to reach markets: either build a major new gas pipeline as a link to existing infrastructure in the Norwegian Sea or increase LNG capacity at Hammerfest. If export capacity limits aren’t increased, projects will have to be phased so as to fill pipeline capacity as it becomes available, destroying substantial value.

'The cards appear to be increasingly stacked against further development of LNG. High project costs, technically complex solutions and harsh environment conditions don’t make for happy bedfellows even when the opportunity is great. When the economics are more marginal, the simpler pipeline solution is most likely the right one,' says Dane Inglis, analyst at Rystad Energy. 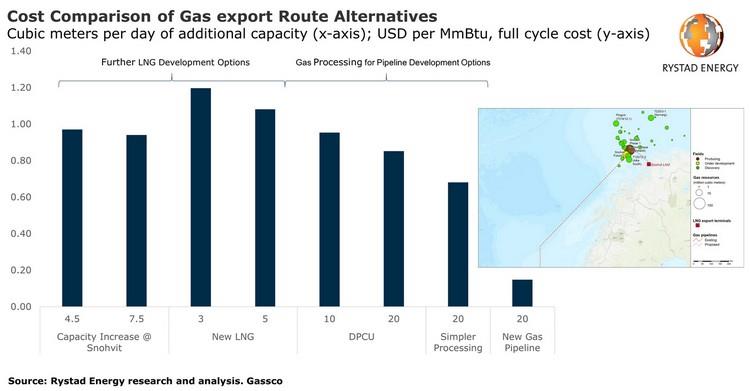 One strategy put forward by Gassco considers installing an additional 1,000 kms to the existing Aasgard pipeline and another 830-km pipeline to the Polarled transmission system. These export lines would raise total export capacity to at least 10 Bcm and potentially as much as 20 Bcm per annum. If we consider only currently discovered resources unconstrained, production would only reach around 9 Bcm per annum throughout the late 2020s and early 2030s. In order to be economically viable, these pipelines would require a gas resource base of about 130 Bcm, thereby implying 40 Bcm in new resources that would need to be discovered over the next five years.

Considering the current spending plans of all operators in the Barents Sea ($2 billion from 2020 to 2025 and 10 exploration wells), the required discovery cost would be around $8 per barrel of oil equivalent (boe) of discovered resources. There is some justification to be optimistic that Equinor could achieve this figure given that discovery costs in that range would be roughly four times the Norwegian average and 60% higher than the Barents Sea historical average.

Unfortunately, the high level of activity in the Barents Sea over the past five years has generated rather meagre results. And given the likelihood of relatively weak oil prices for the foreseeable future, there is a chance that 2020 could be the final year of significant exploration activity in the region.

To start with, building a new LNG plant in the Arctic or expanding the existing one in Hammerfest is not a simple or a cheap task. During its initial construction, the project was eight months late and 50% over budget for a variety of reasons, but mainly due to logistical limitations. Several alterations had to be made onsite at Hammerfest, further delaying the process and adding to the overall project costs.

Hammerfest LNG currently has 4.14 million tonnes per annum (Mtpa) of contracted LNG volumes, with their biggest contract (1.75 Mtpa) sold to Equinor. Unusually, the project has several contracts (0.8 Mtpa) with the termination stated as “upon depletion” and it is unclear what the ramifications would be if these contracts were terminated prematurely.

Unfortunately, new resources have a breakeven gas price somewhere between $3 and $7 per million Btu, and if we assume that liquefaction and transportation costs will resemble those seen at the original facility, landed prices at Zeebrugge could be as high as $8.50 per MmBtu.

If we compare this with Rystad Energy’s forecasted 2030 TTF price of around $7.20 per MmBtu, such an endeavor could make economic sense. However, we estimate that the bulk of US LNG has a breakeven gas price range of between $6 and $8 per MmBtu.

A new pipeline export route wins out in terms of offering the lowest cost, on a per unit basis, for additional gas export volumes.

Assuming the pipeline were to utilize the simpler processing or even the more expensive expansion of an existing processing plant, this project would still realize gas costs of around $1 per MmBtu, a lower cost export solution with any capacity up to 30 MMcmd. This would allow for a further 5 MMcmd of yet-to-be discovered and developed resources to be sent through the conduit.