PetroTal , an oil and gas development and production Company focused on the development of oil assets in Peru, has announced an operations and liquidity update for Q3 2021, and updates on the ongoing community protests at pump station 5.  All amounts herein are in United States dollars ('USD') unless otherwise stated.

Well 7D continues to exceed management expectations from a deviated drilling perspective.  7D is still averaging more than 1,300 bopd.  Since commencement of production in early May 2021, 7D has produced approximately 400,000 barrels and has generated cash flow approx. double its capital cost since coming online five months ago.

Well 9H has reached its third week of drilling, is executing to plan, and trending slightly ahead of completion schedule with production commencement expected in the last half of November 2021.

The final crude processing phase for CPF-2 will be commissioned and operational by mid November 2021.  It is expected to be fully operational by mid January, 2022.  No additional COVID-19 delays have materially impacted the field since previously announced in late summer.

PetroTal executed an oil shipment through Brazil in Q3, 2021 for 226,000 barrels.  PetroTal estimates it may ship two cargos via the Atlantic route in Q4 2021.

At September 30, 2021, PetroTal had a cash position of approx. $58 million, of which $31 million is unrestricted, $20 million is dedicated to accretive acquisitions and $7 million is posted as collateral for commodity price hedges.  The $16 million reduction in overall liquidity was due to increased spending related to the planned capex program and a net increase in accounts receivable.

At September 30, 2021, accounts receivable from current oil sales, including VAT, were $22 million, and accounts payable were approx. $37 million.  Pursuant to contractual terms with suppliers, approx. $3.7 million (11%) of the accounts payable balance is due after Q4 2021.  Ongoing payments will be managed from expected oil field revenues and internal cash resources. The Company maintains access to an additional $25 million from the bond issue for potential acquisitions and development drilling.

Protests at pump station 5 have shut down the Northern Peruvian Pipeline ('ONP') and operations on October 5, 2021.  Since then, PetroTal has been involved with both the government and communities to help resolve the issue peacefully.

PetroTal supports the struggle of the indigenous community and continues to promote a peaceful and long-lasting resolution in the very near future, especially given the new Government's public commitment to all the communities of the Loreto Region where the Company operates.

In the meantime, PetroTal continues to produce at normal rates, delivering oil to Station 1 plus exports through Brazil, and expects to have sufficient oil storage to maintain operations during the disruption at Petroperu's pipeline. 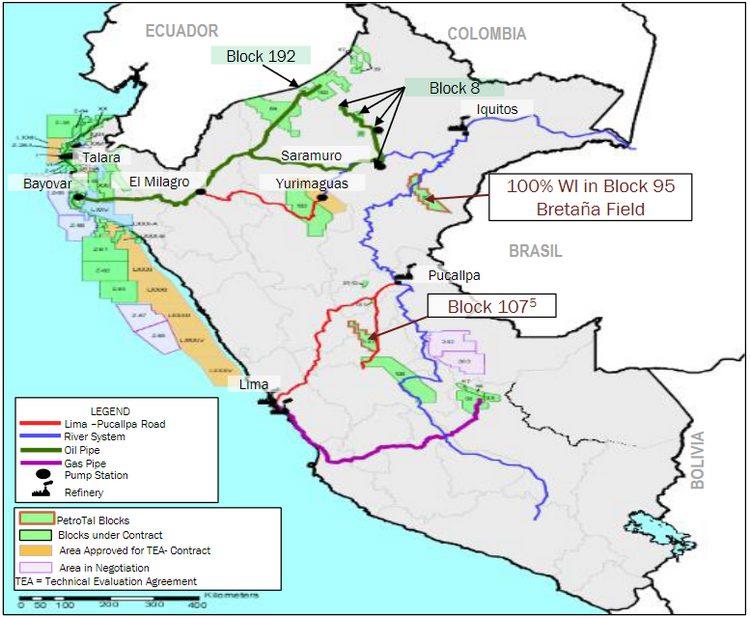 'On behalf of PetroTal, I would like to thank all our employees and contractors for another outstanding quarter.  We are continuously reminded that alignment between the government, communities, and PetroTal ensures an efficient continuance of PetroTal's value proposition.  PetroTal continues to support negotiations between local communities and government social profit initiatives.  We are optimistic all stakeholders will find resolutions in short order.'