WindFloat Atlantic, the first floating wind farm in continental Europe, is now fully operational and supplying clean energy to Portugal's electrical grid. Following the connection of the last of the three platforms to the 20 km export cable connecting the wind farm to the substation at Viana do Castelo, Portugal, the construction of the wind farm is now complete. WindFloat Atlantic, which has a total installed capacity of 25 MW, is the world’s first semi-submersible floating wind farm, and it will generate enough energy to supply the equivalent of 60,000 users per year, saving almost 1.1 million tons of CO2.

This milestone cements the success of a decade-long project by the Windplus joint venture, ensuring access to the best wind resources in water depths that have previously been inaccessible. Windplus has successfully installed and connected three platforms - measuring 30 m in height with a 50 m distance between columns. Each is able to accommodate an 8.4 MW turbine, the largest ever installed on a floating platform.

The success of this project is rooted in its technology. Its mooring technology, for example, allows for installation in waters over 100 m deep, and its design offers stability in adverse weather and sea conditions. Another key advantage has been the assembly technology used: dry-dock assembly has provided significant logistical and financial savings, and the platforms have been towed using standard tug boats.

These technical advantages, among others, clearly show that Windfloat Atlantic's model is replicable in other areas where adverse seabed conditions or significant water depth mean that traditional bottom-fixed offshore wind technology is not an option. 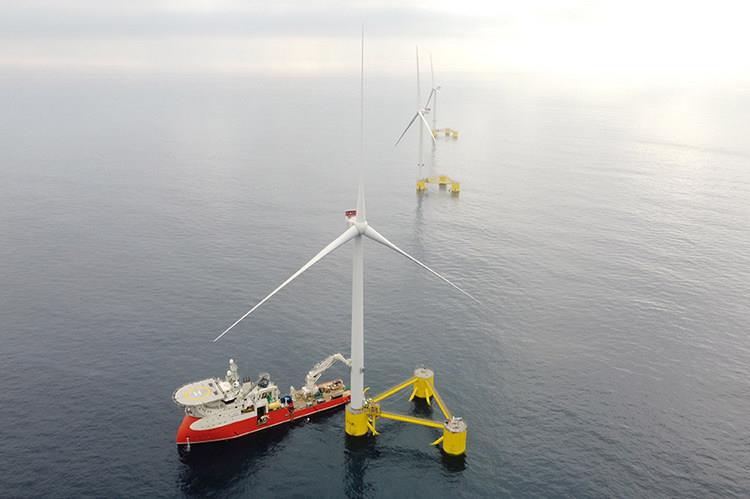 The project is led by the Windplus consortium, comprising EDP Renewables (54.4%), ENGIE (25%), Repsol (19.4%) and Principle Power Inc. (1.2%). The platforms have been built jointly by the two Iberian countries: two of them were manufactured at the shipyards in Setúbal (Portugal), while the third was constructed in Avilés and Fene (Spain).

This initiative has had the support from public and private institutions, encouraging companies that are leaders in their respective markets to take part in the project; while the Government of Portugal, European Commission and the European Investment Bank have provided financial support. The partners that have made this project possible include, in addition to Principle Power, the joint venture Navantia/Windar, the A- Silva Matos Group, Bourbon, the wind turbine supplier MHI Vestas and dynamic cable supplier JDR Cables.