ADX Energy has finalised a Farm-in Agreement including the satisfaction of conditions precedent on behalf of Danube Petroleum and ADX Energy Panonia to fund a 3D seismic program in the Parta Exploration License onshore Romania. Parta Energy (Farminee) will fund a US$ 1.5 million 3D seismic program to secure a 50% interest in the License. ADX will remain the contract operator for the Parta Exploration License. ADX holds a 63% shareholding in Danube which in turn holds a 100% interest in ADX Panonia. 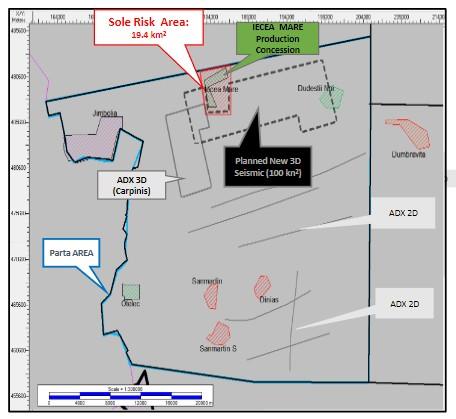 The Farminee will fund the first US$1,500,000 of expenditure for the acquisition of approx.100 km2 of 3D seismic to earn a 50% participating interest in the Parta Farm-in Rights. ADX has previously acquired approx. 100km of 2D seismic, 50km2 of 3D seismic (surface area), has reprocessed approx. 470 km of vintage 2D seismic and has licensed (with landowners) an area of approx. 200km2 for future 3D seismic acquisition within the Parta Exploration License.

The planned 3D exploration seismic acquisition program is expected to commence in November 2019. The new data will be integrated with previous 3D seismic acquired by ADX and 3D seismic purchased by ADX in conjunction with the acquisition of the Iecea Mare Production License. The 3D Seismic is intended to focus on an area with proven prospectivity for both oil and gas.

The Parta Exploration License activities are intended to provide low risk,high reward exploration follow up drilling locations for ADX and Danube following on from the Parta Appraisal Drilling Program.