The financial impact of Western sanctions and the widescale exodus of foreign partners from the Russian oil and gas sector are beginning to materialize, with upstream investments set to sink to $35 billion in 2022, according to Rystad Energy research. Before Russia’s invasion of Ukraine in late February this year, upstream investments in Russia were expected to approach $50 billion in 2022.

Investments in Russia’s upstream sector totaled $45 billion last year, rebounding from Covid-19-induced lows of $40 billion in 2020. But as Russia becomes increasingly shut off from the global energy market, investments have sunk well below levels seen in the pandemic-affected years of 2020 and 2021 and will remain subdued until at least 2025. The stagnation in investments will lead to a drop in project final investment decisions and force operators to make hard decisions on spending. While domestic giants Gazprom and Rosneft will be able to keep spending around 2021 levels, other players will see a significant drop in investments.

A significant factor limiting investments is the delay of several large liquefied natural gas (LNG) projects, which have now been pushed out five or six years into the future due to technological and funding constraints as Western partners pull out. Before Russia invaded Ukraine, investments were anticipated to rise significantly as Gazprom had lined up the development of several large gas-condensate fields in the Yamal region and Novatek was actively involved in its Arctic LNG-2 project. Now, only some of these projects are likely to get off the ground before 2025.

'The war in Ukraine has cost the Russian oil and gas sector dearly, with project investments taking a significant hit. Covid-related disruptions in 2020 dragged down spending but this year looks set to be the start of a multi-year slump that will make the Covid years pale in comparison,' said Swapnil Babele, Rystad Energy senior analyst. 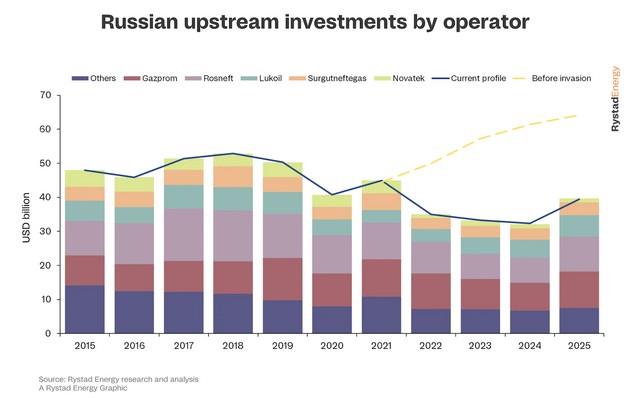 Greenfield investments are set to suffer the largest drop in spending due to the sudden sharp decline in approval activity this year. Investments in new Russian projects are projected to fall 40% from last year, tumbling from $13.7 billion to just $8 billion this year. Only around 2 billion barrels of oil equivalent of resources were sanctioned last year, with almost all those volumes coming from the Baltic LNG project at which Gazprom started construction in May 2021. In light of Russia’s invasion of Ukraine, however, financing the project will be a struggle for Gazprom. Service companies have already started leaving Russia, while Linde, which is providing its proprietary LNG technology for the project, has also exited the country.

No significant new projects are expected to be sanctioned in Russia next year, but activity will resume in 2024 with the Gazprom-operated Chayandinskoye (Phase 2) gas-condensate field – a resource base for the Power of Siberia-1 gas pipeline to China – and the Payyakhskoye oilfield, part of Rosneft’s huge Vostok Oil project in the north of the country.

In comparison, brownfield investments are expected to drop by only 14% as oil production has not taken a significant hit. The impact of lower oil demand will be visible next year when brownfield investments will drop by approximately 20% compared to 2021. Rosneft and Lukoil will account for roughly 42% of the spending. 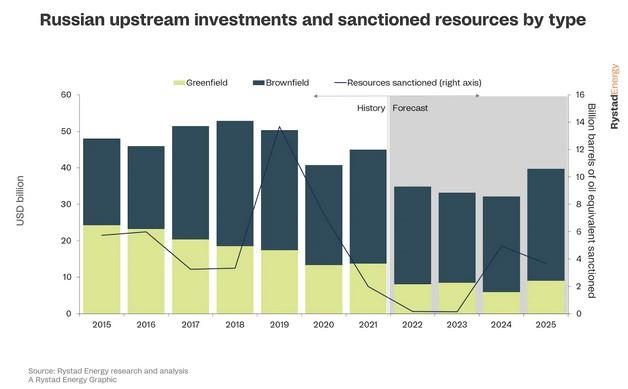 Russian gas giant Gazprom in October approved its updated investment plan for 2022, showing capital expenditure increasing by 22.5% to $28.6 billion. Rystad Energy estimates that about $10.4 billion of that spending will be funneled into upstream operations, a marginal drop from the $11 billion spent on upstream investments in 2021. Most of these investments will go towards developing its enormous gas-condensate reserves in the Russian Far East and the Yamal Peninsula. Although some of these discoveries were intended as feedstock for gas deliveries to Europe before the war with Ukraine and are now estimated to take longer to come on stream, Yamal is still positioned to be the next largest gas hub for the country in the coming years.

Gazprom is still developing major fields such as the Bovanenkovskoye group and Kharasaveyskoye and is building the infrastructure to connect the fields. Gas from the Yamal fields is predominantly used as feedstock for the European market, but once the pipelines are in place, these volumes can be redirected towards Asia, opening the market to more Russian gas flows.

Rosneft is following Gazprom in raising capital spending this year despite sanctions and a challenging macroeconomic environment. Total investments rose 14% in the first half of 2022 compared to the same period last year, with upstream expenditure accounting for roughly 90% of total spending. We expect the operator’s upstream spending to total around $12.9 billion this year, similar to 2021’s $13.1 billion. The Vostok Oil project will attract between 25% and 30% of the total upstream budget. Rosneft is carrying out extensive drilling activities in the area, appraising the deposits to confirm additional reserves. We expect a large portion of the capital investments to go toward the construction of project facilities. Excluding these costs, 2022 spending will come in at around $9.5 billion compared to $10.7 billion last year.

Before the Ukraine invasion, Novatek was focused on raising funds for its Arctic LNG-2 project. The Russian independent intended to boost its LNG output from a current capacity of 18.8 million tonnes per annum (Mtpa) to 40 Mtpa by 2027 with the launch of Arctic LNG-2 and Yamal LNG Train 4. However, this target is expected to take five to six years longer to achieve. The operator is focused on bringing online the Arctic LNG-2 Train 1, and work on the remaining trains has been halted for now. The project partners had secured financing for 57% of the total required investment of around $23 billion by the end of 2021.