'The start of the new seismic surveys on Block 11B/12B offshore South Africa represents the beginning of a very active period for our Company. Seismic operations will continue through April 2020 alongside the next drilling campaign, which is expected to begin in the first quarter of 2020 with the spud of the Luiperd well. The joint venture plans to keep the rig on Block 11B/12B for almost a year and drill up to three exploration wells. We congratulate the operator, Total, for expediting this ambitious exploration program, and we look forward to rig mobilization in January.' 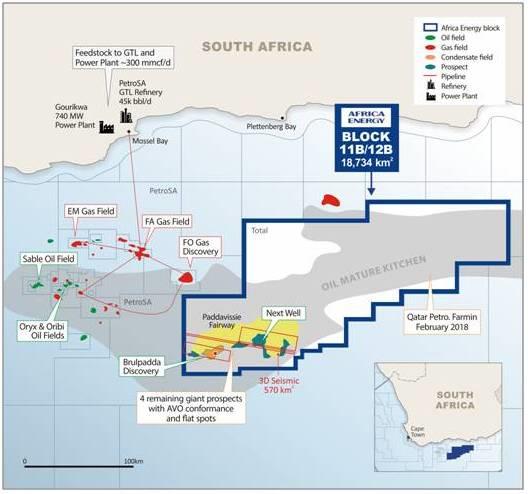 Shearwater GeoServices is acquiring an initial program of 3,650 kms of 2D seismic using the Multi-Purpose Vessel SW Cook with fast-track processing onboard. The 2D seismic program will attempt to define the lead and prospect inventory of the large under-explored area in Block 11B/12B to the east of the Paddavissie prospects.

Petroleum Geo-Services ('PGS') is acquiring 2,200 sq kms of 3D seismic using the PGS Apollo seismic vessel. In this second phase of 3D seismic work on the block, the joint venture plans to cover the remainder of the Paddavissie Fairway to better delineate the prospects and leads identified on the previous 2D and 3D data.

In March and April 2019, Polarcus acquired 570 sq kms of 3D seismic using the Polarcus Asima vessel. The first phase of 3D seismic covered the Brulpadda discovery and the Luiperd prospect. The joint venture received the preliminary, fast-track 3D results in August 2019, and we expect to receive the fully processed 3D seismic dataset by January 2020. The preliminary 3D results validated the direct hydrocarbon indicators and thick reservoir development, confirming the large resource potential of the Paddavissie Fairway.

Block 11B/12B is located in the Outeniqua Basin 175 kms off the southern coast of South Africa. The block covers an area of approx. 19,000 sq kms with water depths ranging from 200 to 1,800 meters. The Paddavissie Fairway in the southwest corner of the block includes the Brulpadda oil and gas discovery, as well as several large submarine fan prospects that have been significantly de-risked by the discovery and subsequent 3D seismic work.